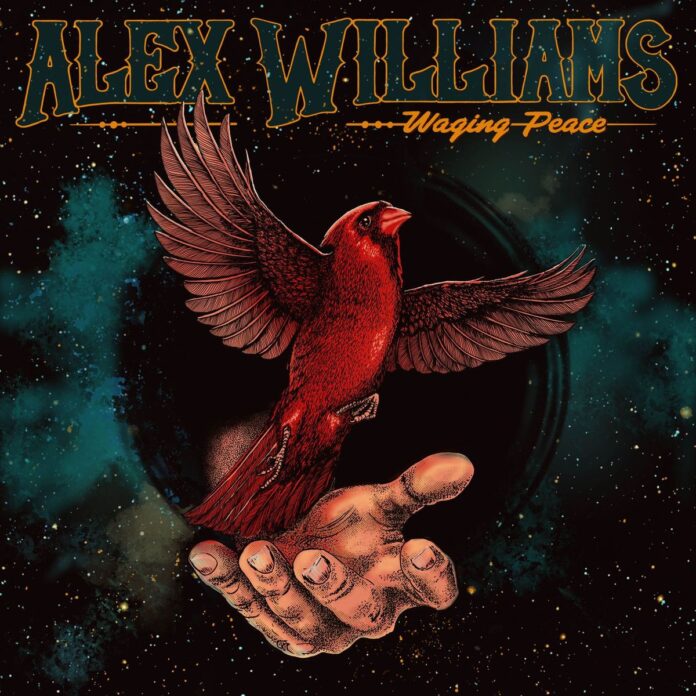 On the opener here, “No Reservations”, Alex Williams sings this. “I ain’t looking for trouble, but I ain’t turning any trouble down”. And that, right there, is how I have always seen Outlaw Country.

I was a rock n roll obsessed kid (I am a rock n roll obsessed man, now) but back in the 1980s, I’d have been maybe, eight or nine and I was totally enthralled by the Dukes Of Hazzard TV show. It was on every Saturday night and that was my routine. I didn’t know the theme tune was Outlaw Country, but I loved it. I didn’t know it was Waylon Jennings, until a few years later when I bought a tape of country hits in the record shop, but it does mean when I say I have a lifelong love of this type of music I mean it.

I’d wager, Alex Williams, who appears to be a good deal younger than me, can say the same. “Waging Peace” is the sort of record that a lifer makes. And, lets get down to brass tacks here, it’s brilliant. Indeed, its as good as this type of thing has got or will get in 2022.

The opener is hewn in the back roads, its got a whiff of violence, like Williams is your best mate, but don’t get on the wrong side of him for your own sake, and its got the feel of a southern rock band as much as a country one.

“Old Before My Time”, though, and this is where Williams really scores, is pure honky tonk. He knows it too, “I’ve got the habits of my heroes and the crazy of my family in my veins” goes its first line and immediately he’s casting himself in the shadow of the greats, but is savvy enough to keep it fresh.

One minute his Townes Van Zandt, as he is on “Rock Bottom”, the next he’s being cinematic as he is on the slow burning “Fire”, which could easily be a Whiskey Myers song (praise doesn’t come higher on these pages) and like all the hardcore troubadour’s (that would be a good title for a song….) he’s battled his demons, “Higher Road” is your proof.

Impressively, Williams writes or co-writes all of these, and there’s some real diversity here. The title track is one that immediately seems important, both to the album and the artist, “my only enemy looks a lot like me” – it’s hook – is a key line in this regard, and the lead guitar on “Conspiracy” is mighty.

One thing we haven’t spoken about yet – and it’s arguably the most important thing here – is Williams’ voice. Deep, rich, and the voice of a man who was born to sing these type of songs, it means that when he goes truly old school country on “The Best Thing,” a ballad of pure vintage, it sounds perfect, just as much as it does on “Double Nickel”.

That one, about (according to google, a road which heads from Chicago to New Orleans) is the standout thing here just for one simple reason: one of my favourite songs in the world is Elvis’ version of “Promised Land”, this re-writes it.

“Confession” hints at a type of Blackberry Smoke vibe, “The Struggle” turns itself into a back porch strumming classic, and the haunting sounds of “The Vice” are surely straight from an autobiographical place, “we go looking for it every day to escape” he sings at the end of the chorus, and maybe Alex Williams found the way out in these songs?

Which is why, although valid, the comparisons with Chris Stapleton and Sturgill Simpson are not quite fair. In future years someone will be the “new Alex Williams”, that’s how good this is. Not that he seems overly bothered, he is, as he puts it on “…..Nickel” “one mile at a time I’ll be taking on the world with nothing but a four piece band”. The battle is real, and he’s already won, simply by “Waging Peace”.