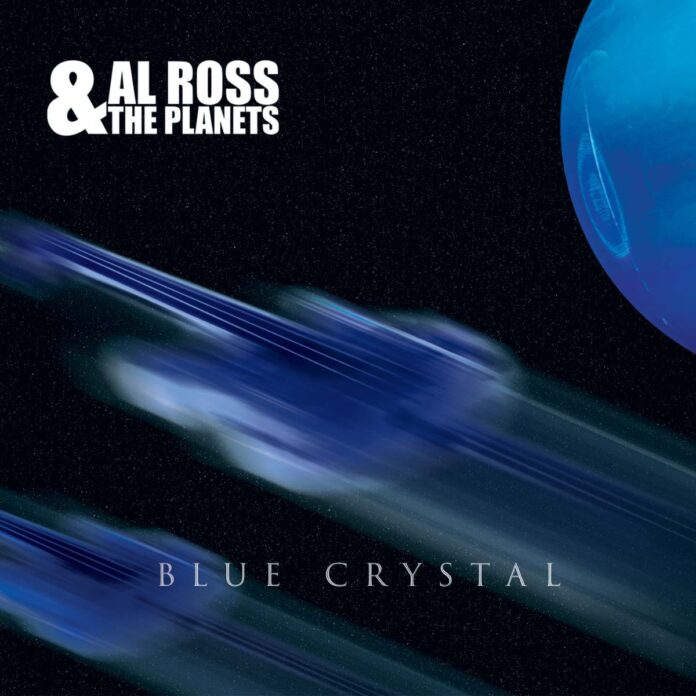 Al Ross & The Planets are a London-based rock band who first formed in 1983. Their biggest influences are The Beatles, The Rolling Stones, Pink Floyd, The Band and Led Zeppelin. In the early nineties they were one of the most popular live bands in London. Their new album `Blue Crystal` came together under extremely difficult circumstances with band members catching Covid and restrictions in place. Al Ross & the Planets on this album is Al Ross (Alan Ramirez) (lead vocals, bass), David Brammer (saxophone), Terry Mascall (drums), Alex Mungo (vocals), Julian Mungo (acoustic guitar), and Marc Rapson (piano, Hammond organ, keyboards, percussion).

The album opens with `Crossroads` initially with piano and vocals before slowly building in intensity and becoming a quite gospel tinged anthem with some delightful backing harmonies. Although it runs at just under seven minutes, this allows time for some brief organ and brass solos before the full complement of musicians come together to see the track out. We have a kind of parting ode to a lover in `Something Changed My Mind`. It meanders along quite dreamily with the gravelly vocals sounding like a restrained Joe Cocker meets Roger Chapman.

`Faith` has some really captivating dance like rhythms and some delightful piano keys. A love song of sorts pleading with a partner to spend the night together. It has a jazzy texture with a blistering saxophone solo near its conclusion. Title track `Blue Crystal` is another number that`s initially stripped back before blossoming with guitar riffs, a steady drum beat and what sounded like violin strings before the addition of a trumpet and organ towards the end. A quite intense submission.

`In the Middle of the Night` has a bluesy texture about it and builds passionately as a choir joins and adds a gospely vibe. There was an almost Steely Dan feel to the piano driven `All the Things We Started` which enjoys a dreamlike trumpet solo midway through.

`Checkin` Out the Vibe` has a similar bluesy classic rock strut to Bachman–Turner Overdrive`s “Takin’ Care of Business” The wall of brass sound is superb as is the sax solo in the latter part, a number that will get your blood pumping. We close with `Sweet Memories of You` which I have to say reminded me of Pink Floyd, especially “The Great Gig In The Sky” when Holly Petrie’s vocals join in. A quite profuse and overwhelming number to close out on.

There`s a variety of genres of music here from Bluesy rock outs, quite intense love songs, gospel tinged arias and real `sing a long` numbers. I can understand why the band were one of the most popular live bands in London, guaranteeing a memorable night out. `Blue Crystal` is an album that demands your attention and to me is the kind of release that really captures you the more you listen to it.