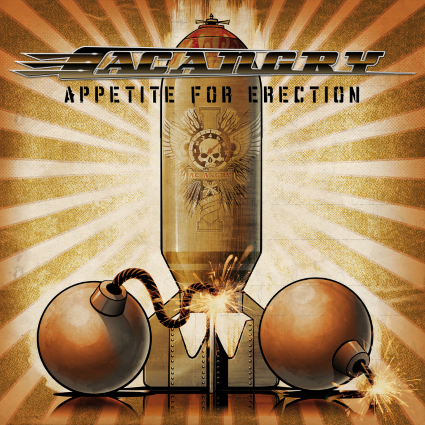 Welcome to the album you won’t want to like but will…..

Let’s be honest, if you call your album “Appetite For Erection” you don’t really care that Bob Dylan won the Nobel Prize for literature, do you?

Rather, you subscribe to the view that there are two sorts of music: rock and roll, and that’s exactly what you get from Germany’s AC Angry, on their major label debut.

Very cheerfully beginning the record with a cut that is so simple it makes Motorhead seem like Pink Floyd by comparison, “they make my asshole bleed” is a key line in it’s verse, but it’s the “they” here that is important, because the song is called “I Hate AC Angry.”

In short all the clichés about Germans lacking a sense of humour can largely be dispensed with here. The four piece know this is ludicrous and they couldn’t give two shits.

If they did then surely they wouldn’t have the thought of “no way you’re coming back, now get down and lick my sack” at the centre of “4TW”, there wouldn’t be the undercurrent of violence in the blues of “Nowhere to go but down,” and there wouldn’t be a ballad here called “Son Of A Motherfucker’s Son”. This has the same intent as Skid Row’s “18 and Life” at the end of the 80s, but with more swearing.

And so it goes. Take the riffs of AC/DC and the fuck you attitude of Motley Crue, add a dash of any punk band ever and you might come up with “I Wanna Hurt Somebody” and the title track – and get this –  it really does contain the line:” I got a boner all day and a smile on my face”  and is even dumber and filthier than it sounds.

Look, there’s no reason in the world that anyone should admit to enjoying a song called “The Balls Are Back In Town”, no one should write a ballad called “Cry Idiot Cry” but you will, and AC Angry have.

The thought that both band and listener are in on the joke is why this is great. That and it finishes the record with a song called “Testosterone” which has the pay off of “balls out ready for a good fucking”. A family singalong this is not. It’s nasty, it’s stupid and it’s better than you dare admit.

Unreconstructed, this is essentially the musical equivalent to laughing your head off when someone gets a punch in the balls. You don’t want to find it funny, you know it shouldn’t be, but it is. That’s the best way to look at it. Of course you know there’s a million more worthy albums released this year, but despite that, if there’s any rock n roll rebel in your heart, you’ll find much to like despite your best efforts.

Now, turn it up to 11 and don’t let your Nan hear it at Christmas.