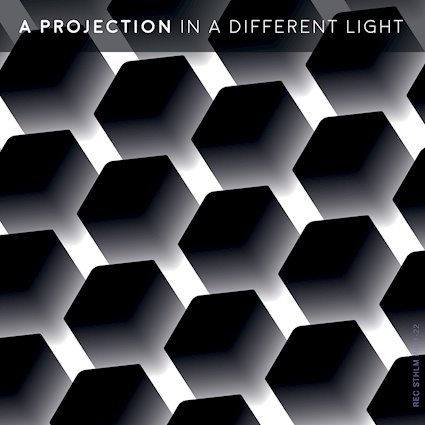 A Projection are an indie rock / post-punk band from Stockholm, Sweden with dark textures of effect-driven guitars, lush synthesizers, and heartfelt, introspective lyrics. The quartet of Gustav Forneus, Jesper Lönn, Linus Högstadius and Rikard Tengvall`s music has frequently been compared to that of Interpol, New Order, The Cure, and The Chameleons. `In A Different Light` is the band`s fourth album and follows 2019`s `Section`

The album opens with `Careless` which is a fairly fast paced number and at times put me in mind of John Foxx`s material of the early eighties. I read that the song reflects the restlessness and hope of the last two year period during the Covid lockdown. It does seem to have that mediative outlook shared in the vocal delivery. The rapid pace continues on `No Control with a throbbing electronic beat leading us along and vocals that seem to contain a sense of helplessness almost anxiety. Again,  it was a track that had a retro feel.

`Paris Stockholm` appeared to have some railway sound bites faded into the track. It`s sung in French and as my knowledge is limited, I can only assume it equates to a journey between the two destinations of the title. It`s a dreamy melodic piece that does give that sense of movement or a trek of some kind. The addition of guest vocalist Sarah Boom from Belgium shoegaze / post punkers Turquoise added a delightful foil to the lead vocal. I thought `Anywhere` was wonderfully reflective with lyrical content that seemed quite searching or questioning. It was a charming earworm of a track that I played a fair few times before moving on.

`Regenerate` begins as a real bass driven offering as synth swathes join in and the vocals are floated atop. A pensive number at times which becomes a little anthemic as the title strapline is repeated at times throughout. We have pounding drums that lead us into `Cover My Eyes` which was a really interesting listen, quite introspective and maybe apocalyptical. The additional harmonies towards the end of this composition added to the sense of foreboding.

`Interlude` is just what it says on the tin, a brief instrumental soundscape that could have come straight out of any of the Terminator movie franchises. We have a love song of sorts in `Darwin`s Eden` which seems to suggest a relationship that is desired but the narrator realises it would be disastrous and ultimately destructive. The vocals are wonderfully heartfelt and you can almost feel the longing, confusion and pain conveyed in this almost spiritual offering.

`Lost Conversation` is a little different. It has some flowing synths but seemed to be a pretty busy outing that seemed slightly jumbled at times. A track that may make more sense the more you listen to it. We return to a more melodic setting with `Reflections` which seemed satisfyingly contemplative and became fairly emotive as it faded out.

`Journeys` runs at over six minutes but doesn`t feel overly long and put me in mind of the contemplative and wistful tracks that Depeche Mode are really adapt at composing. It had a quite repetitively mesmerising harder electronic edge to it. We close out with `Confession` which i`m sure was influenced by New Order as it has that extremely  tense, edgy, dark, and sleazy bass riff underpinning this submission. The vocals become nigh on anthemic as the song progresses with some complementing harmonies. A cracker to end on.

I thought `In A Different Light` was a terrific slice of  electronic post punk with lyrics that gave your cerebral matter a bit of a work out. There were some exquisite nuances shared throughout this opus and it`s a release that ii found difficult to leave.

Previous article
GHOST OF A CHANCE
Next article
CRYING FOWLER