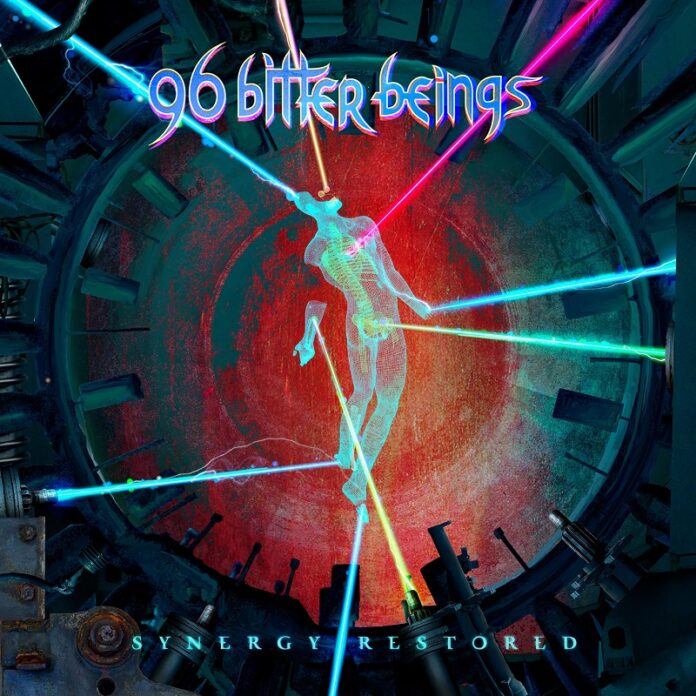 I’ve got a bone to pick with 96 Bitter Beings. Never mind the fact the music is superb, no. Never mind the confusion over who is in the band currently. There’s a more pressing matter at hand.

A couple of weeks ago I was on the way to see The Damned (they were very good, thanks for asking) and there was a queue on the main flyover into the second city in England – I was literally about two miles from where heavy metal was invented – and I am playing “Synergy Restored” loud. Behind me, there’s a load of flashing lights as a couple of police cars try and get somewhere. Just as I try and force my way over the lane to let them past, there’s an almighty skid, a peeping horn and the sound of a tremendous crash.

Dear reader, I shit myself. I can’t lie.

I know now that it was the start of the song “90 Car Pile Up” and I feel a bit silly, but a couple of weeks ago I didn’t. Clearly. So, cheers 96BB.

To be fair to them, they don’t know that reviewers are sometimes nervous people, and that is the only quibble you could possibly have with “….Restored” because it’s a mighty impressive piece of clever rock n roll everywhere else.

Right from the off of “Vaudeville’s Revenge” this has no pretence, you see. It’s a rock n roll album for no reason either than to celebrate the fact that rock n roll is ace. It’s full of sloganeering lyrics. “You’re still chuffed to saw a girl in half/And sit still for a photograph” sings Deron Miller, and he’s only getting started.

“Wish Me Dead” grooves. Big grooves, but still with a glam rock thing. Before it gets to the hook, “if you could have just one wish, you’d probably wish me dead.”

And if you’re thinking you know that name, you do. Until 2011, Miller was the lead singer in CKY, and although he occasionally dabbles in death metal, then this is the place to go if you want to hear him at his most authentic since that.

Along with lead guitar man Kenneth Hunter (he’s stunning throughout) Miller and the Lurera brothers (who are on the album but appear to have left since, maybe. It’s not clear) 96BB  have made something that is very much fresh, but classic at the same time.

“Fire Skyline” is another that seems to have been written with the t-shirts in mind (“who picks truth in a game of truth or dare” is a hook that just sticks) but so catchy are all these that you probably need a rub down with a wire brush afterwards. “Throw Yourself Inside” is full of chunky goodness, and its worth saying that despite needing fresh underwear the first time I heard “…Pile Up”, its tremendous fun.

“Bedtime Story” is surely the work of an 80s rock obsessed kid, and in interviews Miller reckons “Bloodrock Mania” is the one that made the band realise that they’d reached the “next level”. You can see why too, it’s so big, unashamed and the twin guitars might as well be Night Flight Orchestra so big does it all sound.

And its worth pointing out too, that there is no letting up in the “deep cuts”. This is not one of those records with three good songs on at the start to convince you to download on Spotify, no. Rather, “Slither Away” stomps and shines, and “Taken By Surprise” has a 90s disco feel. Any of these, if people still bought singles, could have been a gold disc candidate back then.

It has to be said too, that if one word could sum this up, then “energy” will do.  “Adios Amigo” brims with it, and “Conditioned Or Unconditioned” does likewise – indeed it finds another gear that normally belongs to arena rockers.

That’s almost the point, here though. Why should music sound a certain way? What if it sounds big, brash and fun?

What if it sounds like “Synergy Restored”, I guess? Just take care if you’re nervous……