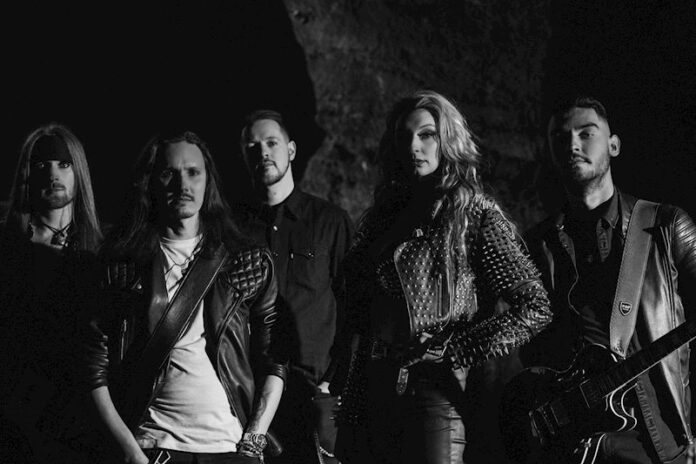 Rapidly rising “rock n roll livewires” (Planet Rock), Kira Mac announce the dates for their first touring. What’s more, their full studio album ‘Chaos is Calling’ is due for release in Autumn 2022. The album’s debut single ‘One Way Ticket’ and its vibrant, colourful video came out in March and within 2 weeks Planet Rock made the single a Track of the Week and it has since moved up to the Planet Rock A Playlist.

The strong follow-up single ‘Dead Man Walking’ will be released on 6th May.

Kira Mac is a musical collective made up — they proudly proclaim — of misfits from different corners of the country, from Stoke to Hull, who met by chance in Manchester back in 2018. Named after their eponymous frontwoman, Kira Mac are a band built on straight-up old school blues rock riffs given modern edge, a tonne of flair, soul and intense double shots of rock ‘n’ roll. Using twinned powerhouse vocals plus a killer guitar lead, they form a force to be reckoned with.

Kira Mac herself is an established writer and vocalist, who went on to form with guitarist Joe Worrall. This has evolved into the band today, powered by the driving force of original song writing and the unique sounds and stylings that the band produces, with Alex Novakovic (Electric Guitar); Bret Barnes (Bass), Cal Casey (Drums) in the line-up.

The band’s raw talent and accomplished tone is built from grassroots and the love of eclectic sounds and acoustic skills. As a collective, and hive mind, they’ve absorbed influences from great bands and artists that came before them, being raised in particular on old school rock, blues, and everything else in-between.

Of the forthcoming album, Kira says, “It’s been in the making from 2015 when Joe and I met. It’s been a really long time coming (and we’ve had such an incredible time writing and making it on its little journey) that we hope everyone loves listening as much as we loved making it! I think this album has a song for everyone, whether you like rock or blues music or not — and above everything else, it’s us, and its honest.”

The band are delighted to embark on their very first tour. Frontwoman Kira Mac herself says, “We’ve been waiting for the right time to finally travel to some amazing places to showcase our little songs we wrote in our bedrooms, and it’s unreal to think that were going to get to play and meet all the amazing people who support our music. We’ll be bringing a rock n roll party!”

In May, Kira Mac will be supporting Ricky Warwick.  They’ll play The Booking Hall, Dover on 19th May; then Nuneaton’s Premier Live Music Venue, Queens Hall on 21st May; and the North of England’s finest intimate music venue, The Picturedrome, Holmfirth on 22nd May.
After that, on 2nd July, Kira Mac will support Bad Touch and Revival Black at Waterloo Music Bar, Blackpool.
Then, on Friday 29th July, Kira Mac will play the independent grassroots classic rock festival, Steelhouse Festival, held at Aberbeeg in South Wales, the site making it the highest festival in the UK!
Then on 2nd December, the band will be playing the annual rock extravaganza Planet Rockstock, at the newly refurbished Trecco Bay Holiday Park in South Wales.
As the band say, “With a brand-new album coming out in the Autumn of 2022, it makes sense to promote it with 11 dates through England, Wales and Scotland (Ireland we’re comin’ atcha soon!)

“Tickets go on sale at 9am Friday 22nd April.

To find out where Kira Mac will be playing, or to follow their updates and releases, follow on their website and social media platforms (see below).

And in the meantime, check out Kira Mac’s current single on all digital platforms and watch for ‘Dead Man Walking’ on 6th May.