Magenta mastermind is back. Just don’t call it prog by numbers

Multi-instrumentalist, producer and composer Robert Reed announces the release of SIGN OF IV ,
the debut album from KIAMA on Tigermoth Records. The band features Magenta mastermind REED,
along with Andy Edwards (IQ, Robert Plant, Frost*), Luke Machin (Machine, The Tangent) and
Dylan Thompson (Shadow Of The Sun, The Reasoning).
Collect together some of the UK progressive scene’s most accomplished players and what would you
expect? A prog album? KIAMA’s debut album owes more to ‘classic rock’ than what’s happening in
the current prog scene. Band leaderReed is quick to point out: “ Kashmir & Stairway to Heaven are
classic prog tracks, as is Stargazer by Rainbow, plus a lot of stuff by bands like Queen and Deep
Purple.”
The genesis of KIAMA grew out of a conversation between Reed and Edwards, “We were doing the
drums in Rockfield Studios for Magenta, which is where Rush recorded A Farewell To Kings and
Queen did Bohemian Rhapsody . Those albums were so good because they were recorded with the
whole band in the same room playing together. That idea developed into forming a band and doing
SIGN OF IV exactly that” explains co-founder Edwards. “So much of today’s music aims at sonic perfection using
file sharing and studio trickery rather than recording live performances. Nobody seems to be serving
the middle ground anymore.” adds Reed.

With such a demanding ideology the challenges shift towards the songs. “We didn’t want to do  another ‘prog by numbers’ album,” Reed explains. “There were loads of bands in the ’70s who mixed various styles of music together. What they all had though, were great songs regardless of ,where the influences came from. You’ll get prog, hard rock, funk, R&B and a bit of jazz all in one package. It’s all about the melody, groove, not musical widdle” adds Reed.

The band are offering fans the chance to join the Kiama Club, which will provide early access to new
material and exclusive rights to buy a special three disc set of the album, complete with two CDs
and a DVD featuring videos and 5.1 mixes. Visit www.kiamaband.com for more details. 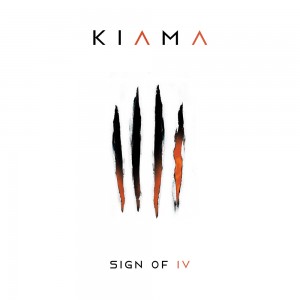