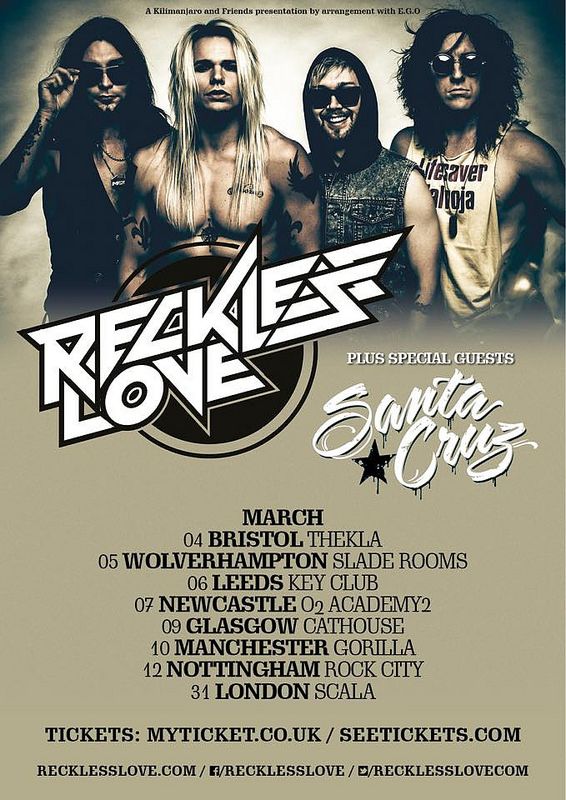 Reckless Love will return to the UK for a run of eight headline shows in March 2016; these dates, the Finnish showmen’s first over here since December 2014, will be in support of a brand new studio album, set for release via Spinefarm Records inFebruary of next year(date tbc). This will be the fourth album under the Reckless Love banner, following on from 2013’s ‘Spirit’– a Top 3 entry in the Finnish charts.

As ever, Reckless Love will be striking a blow for hook-heavy rock music of the more colourful kind, and this time around they’re bringing like-minded reinforcements in the shape of fellow Finns, Santa Cruz. The Helsinki-based outfit, also signed toSpinefarm, have thus far released two studio albums, the most recent being their self-titled outing from earlier this year. Santa Cruz have just dropped their latest (and hottest) music video, ‘Let Them Burn’, which gives an incendiary indication of what UK fans can expect next March.

Between the shows in Nottingham and London, both bands will be heading across to mainland Europe to further plant the flag for real rock ‘n’ roll based on core values i.e. well-crafted songs delivered with skill and the all-consuming desire to entertain; rock ‘n’ roll inspired by the ‘glory days’, but with sights set on the future…

The UK tour dates are as follows:-

Tickets for the UK tour are on sale. You can buy them directly from See Tickets here