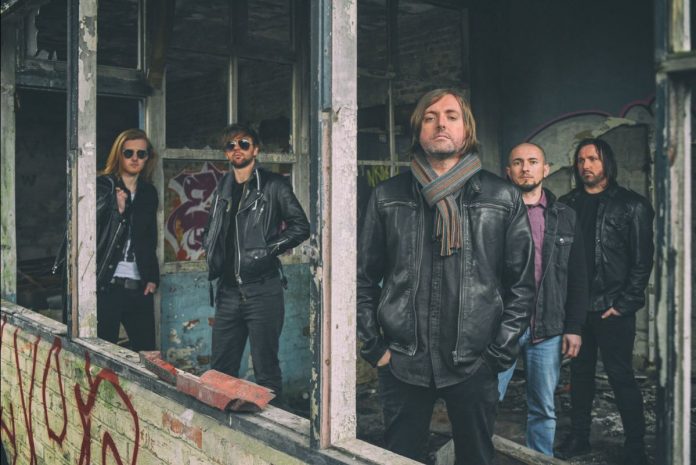 Scarlet Rebels are thrilled to announce that their new album, SHOW YOUR COLOURS, will be released on Fri 09 August 2019 via ROAR! Rock Of Angels Records.

It will be available in Download, CD and limited edition Vinyl.

The album can be pre-ordered now via the ScarletRebels.com  website.

Show Your Colours was produced and engineered by Tim Hamill (Girlschool, Lemmy, George Michael) and recorded at Sonic One Studios in Llanelli, South Wales.

In 2018, singer-songwriter Wayne Doyle, energetic and powerhouse drummer Gary Doyle and harmonic, rhythmic bassist Wayne ‘Pricey’ Esmonde we’re joined by blistering lead guitarist Chris Jones and on second guitar/keyboards, Josh Townshend, who has rock royalty flowing through his veins, being the son of The Who guitarist Simon Townshend and the nephew of rock icon Pete Townshend.

‘Show Your Colours’ is the debut album by Scarlet Rebel, showcasing an array of songwriting talent, coupled with real sonic weight, making it a stunning record from start to finish, never losing the focus that the song is always served best.

With the expert ears of Tim Hamill (Lemmy, Girlschool, George Michael) controlling the desk, the recording process started with drums and rhythm guitars before then handing over to the rest of the band to put their stamp on the songs.

Taking inspiration from the political situations across the world. Songs like ‘No One Else To Blame’ starts with a punch to the guts, thanks to a roaring guitar intro from Chris Jones, and sets the tone for the whole album. ‘You Take My Breath Away’ hits you with chorus of huge proportions while the talkbox intro and rant of ‘Head’s In The Ground’ follows.

Next up is southern influenced ‘Part Of Me’ followed by the beautiful and poignant ‘Heal’ which climaxes with a duel chorus of two separate voices conversing. ‘Let Your Love Go’, ‘Nothing To Say’ and ‘Save Me’ maintain the highest of songwriting prowess and are all huge choruses based around roaring guitars and skull-busting drums.

‘Blinded By The Pain’ follows with lyrical content based around mental health, which starts as a quiet introspective verse, that builds into a crescendo of layered vocals, guitars and pianos. ‘Shattered Dreams’ kicks the tempo back up with tribal drums, guitars and powerful vocals, before ‘Can I Open My Eyes’ sees an autobiographical lament from singer Wayne Doyle, who’s tendency to get lost in the moment on stage means he often forgets the details of each show! The album closes with the sublime ‘Returning Light’ a haunting ballad about bereavement and losing someone close to you.

Scarlet Rebels prove on this album that songwriting, melodies, guitars, solos, bass and drums won’t ever go out of fashion.

Scarlet Rebels are on the march