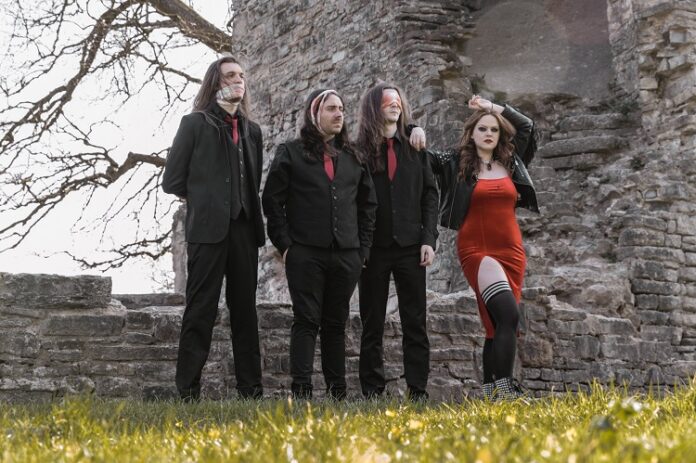 Beth Blade & The Beautiful Disasters have returned with a brand new single and video, ‘Sin Eater’, which was released on April 15th 2022 and premiered on V13 and is taken from the band’s new album, “Mythos, Confession, Tragedies & Love”.

Speaking about the single, Blade had this to say:
“Are you haunted by your Sins? Can you forgive yourself for a past you can’t change? ‘Sin Eater’ takes you on a journey of self-absolution and redemption empowering the listener to find their own strength and power to overcome the demons that may haunt them. With thundering drums, menacing guitar grooves and a passionate vocal performance, you will soon be screaming the words ‘I am the storm’ like a rally cry letting the darkness know it cannot hold you down. Yes, you ARE the Sin Eater.”

Coming off the back of their first two albums, “Bad Habit” and “Show Me Your Teeth”, Cardiff hard rockers Beth Blade and The Beautiful Disasters are set to make a rousing return on July 8th with their new album “Mythos, Confession, Tragedies and Love”. Heaving with monstrous riffs, huge choruses and still underpinned with an old school rock and roll attitude. All the while boasting a new-found aggressive lyrical muscle and twinned with a melodic sensitivity, in which Blade seeks to bring across the weight of her words.

To help secure the best sound possible for their latest outing, the band decamped to the legendary Rockfield Studios to work with producer Nick Brine (Bruce Springsteen, Thunder, and The Darkness). The band set up home in the famed Quadrangle Studio, where Queen recorded “Bohemian Rhapsody”, the studio has also played host to Manic Street Preachers, Robert Plant and Coldplay, among others.

Before the pandemic, the band were no strangers to the live circuit, and with restrictions lifting, they’ll be back out in no time. Having built a reputation as a fierce live act having supported Y and T, Dan Reed and Danny Vaughan, Ricky Warwick, and Damon Johnson among others. They’ve also graced festival stages including Planet Rockstock, Hard Rock Hell and most notably with KISS on the globally renowned KISS Kruise in the US.