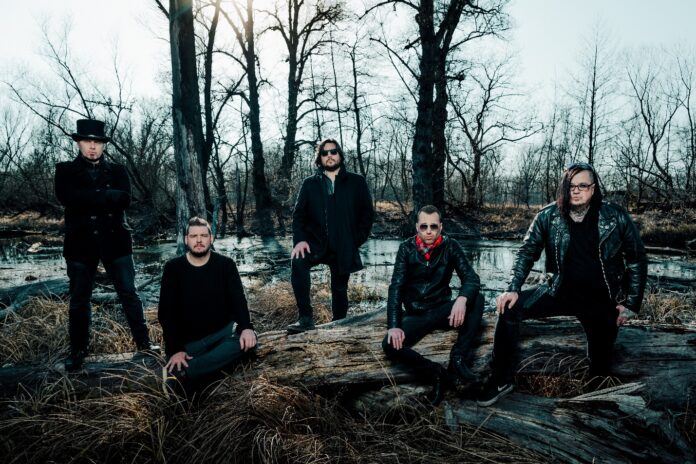 Following the announcement of their new album, From Wasteland To Wonderland (out April 29, 2022 via Napalm Records), and the release of an accompanying lyric video for first single, “After The Rain”, the band is following up with an official music video for the track, as promised. The clip embraces with nostalgia and offers a preview of the future, where the band members can be witnessed in 20 years. They’ve grown old but reunite once more to play together in the impressive landscape of their home country, Hungary.

“After The Rain” delves into one of the most difficult periods of the band’s history, as a heartfelt dedication to accordion player Bernie Bellamy (Bernát Babicsek). Bellamy sadly passed away at the start of 2022, just months before the upcoming release of From Wasteland To Wonderland, which they had worked hard on and looked forward to releasing together. The ballad celebrates Bellamy with a longing melody accented by violin elements, ensuring that he will sail forever in our hearts.

With their six full-length, PADDY AND THE RATS serve a top-notch pirate party fueled by a heavy dose of Punk, Polka and Folk, turning the world into a giant pub! This Irish influenced sound will assuredly bring up the urge to slam down a cold one while swinging happily along arm in arm to the beat! Formed in 2008 by singer and songwriter Paddy, the untamed unit have built a respective name within the scene due to hard work and extensive touring all over Europe – with more than 400 shows including at the world famous Wacken Open Air and the Sziget Festival. For the new album, they teamed up once again with producer Zoli Baker. The artwork was designed by Jill Colbert, who has also worked with bands like Alestorm, Exodus and Wintersun.

On a rousing 13 tracks, the Hungarians magically pull one stirring song after another out of their pirate hats, featuring a great variation of instruments like accordion, fiddle, banjo and bagpipe. The Celtic punks sail off on exciting adventures with their opener “Wasteland”, offering a longing duo of mandolin and vocals accompanied by violin injections. The spirit is incited with “Ship Will Sale”: The rousing track hits like a wild wave and invites the listener to join the party, swaying and stomping with them. The full-length pushes forward with “Party like a Pirate”, where they delight their shipmates with an eager party hit, that comes with a sweeping sing-along chorus. “Everybody Get Up” offers another power boost and slowly prepares for the end of the adventure, with its punkier, energetic sound. The last stop of the journey with the Celtic Punks is “Wonderland”. This emotional ballad provides the perfect note on which to end the album. With From Wasteland to Wonderland, PADDY AND THE RATS deliver a seaworthy adventure that fills the listener with addictive energy and simple happiness.