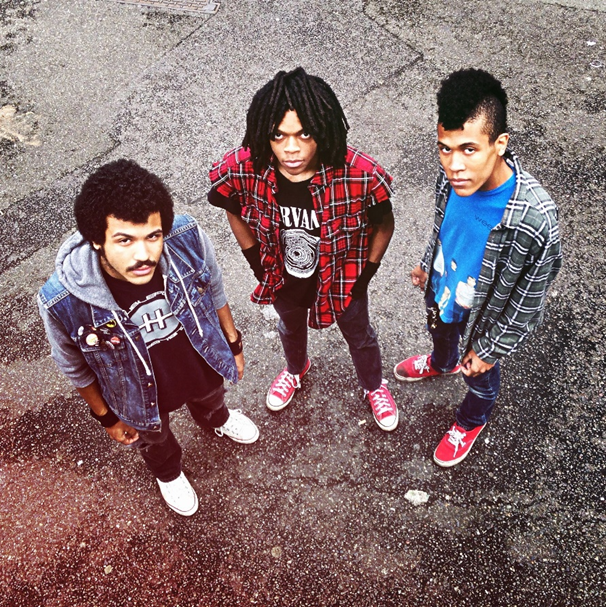 “’Junes’ is a song about rocking out and using characters and situations from video games/anime as inspiration for believing in yourself through all the negativity that you can get when you set out to do something creative,” states the band about the track. “It’s about a fictional superstore from a video game (Persona 4) that a lot of the characters dislike because it puts some of the smaller stores out of business. But through the hate, it is still the most successful store in town and that’s a metaphor for our journey as a band. “

‘Junes’ follows a string of releases the band has put out this year such as ‘Rock And Roll Homeschool’, ‘St. Elwood’, ‘Basement’, and most recently the release of their freak show inspired music video for ‘Feed My Brain”.

RADKEY recently wrapped a U.S. tour supporting British punk rock band The Damned and are currently on the road for a few direct support shows with Descendants. The trio will close out the year with a couple headline shows and direct support slots with Local H. Then, starting in January the band will hit the road in Europe in support of WIZO for a handful of shows. For more information on tour dates or to purchase tickets, visit RADKEY’s website here.

The band comments: “We spent a good amount of our early career playing shows in the UK and Europe and it’s really exciting for us to be able to go back. After playing SXSW for the second time, we made the connections to go over and play Download Festival 2013 and we started to get out there and really got a chance to make a name for ourselves. It’s gonna be an amazing time playing and hanging out!”

RADKEY partnered with MasterCard in January for its #StartSomethingPriceless campaign, featuring SZA. The campaign included a docuseries that premiered on The Ellen DeGeneres Show while commercials aired during the 60th Annual GRAMMY Awards televised broadcast. RADKEY joined five other artists on a cover of Bo Diddley’s”Can’t Judge a Book by the Cover,” the theme song for the campaign. You can stream the “Can’t Judge a Book by the Cover” remix here.

As pre-teens growing up in small-town Saint Joseph, Mo., brothers Darrion “Dee,” Isaiah and Soloman Radke enrolled in rock ‘n’ roll high school as their ticket out of Nowheresville. The brothers played their first show opening for Fishbone in 2011 and haven’t looked back since. In 2013, the “Cat & Mouse” and “Devil Fruit” EPs took RADKEY from sweaty backroom punk gigs to storming the UK’s Download Festival and Riotfest in the U.S. In 2015, RADKEY enlisted Arctic Monkeys producer/mixer Ross Orton to produce their debut record, “Delicious Rock Noise”. The result was an across-the-board detonation of several shades of rock, punk and wild abandon – and riffs, riffs, riffs. Having kicked off 2018 with new music, RADKEY’s sound has continued to expand and mature, reflected in the sleek guitar and growing bass on their new tracks “Not Smart,” “Basement” and “St. Elwood.” It’s a testament to the future of music, and the band is primed for rock and roll glory.