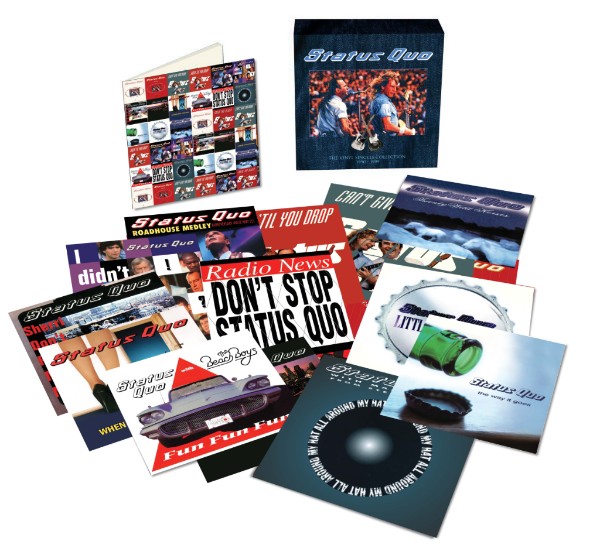 Status Quo release “The Vinyl Singles Collection 1990 – 1999″, on 30 November 2018 via UMC [Cat No 6785247]. This carefully curated release is the fourth in a series of 5 limited edition Status Quo 7” singles box sets. Each set covers a decade (in the case of the Eighties there are two sets) of the band’s UK singles. The music is also available via a digital download code included in the box. Classic Rock said of the first in the series, “This is Quo in their effortless, casually-exalted pomp… The singles box, complete with picture sleeves and choice B-sides, is a delight”.

The singles, mastered from the original tapes, are presented in their original sleeves (picture and house bags). This Limited-Edition release offers sixteen 7” black heavyweight vinyl records housed in a rigid lift-off lid box. The box set contains a booklet with quotes and chart history of each single along with a selection of rare foreign covers and memorabilia.

“The Vinyl Singles Collection 1990 – 1999” is a phenomenal collection that will be cherished by Quo fans the world over.

Previous article
KRIS CROSSES THE COUNTRY
Next article
IN THE BACKGROUND