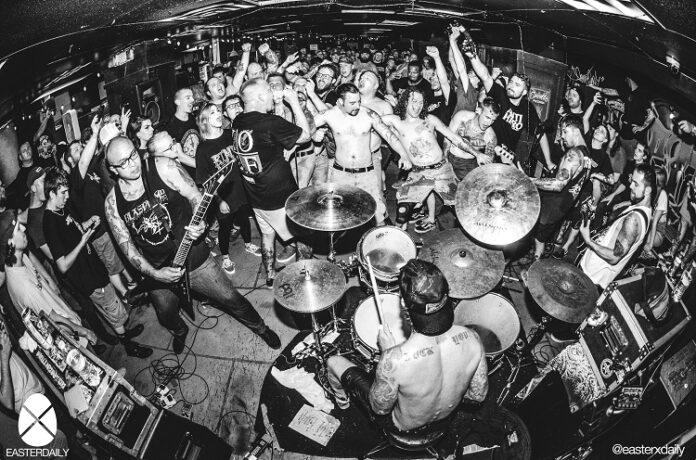 Hardcore legends, Terror, recently announced their upcoming eighth full-length, Pain Into Power, due out May 6th via End Hits Records. The album marks a full circle moment for Terror as they teamed with founding guitarist and current Nails mastermind, Todd Jones, who produced the new material. The result is 20 minutes of unrelenting hardcore fury that’s sure to turn heads with longtime fans and the uninitiated alike.

Today the band are sharing one more early taste of the record with its pummelling opener and title track, ‘Pain Into Power.’ The song and its accompanying music video follows previous singles ‘Can’t Help But Hate‘ and ‘Boundless Contempt‘ and captures everything that Terror excel at in 53 seconds of perfectly crafted hardcore. Hurtling through a blink-and-you’ll-miss-it verse into a crushing breakdown, ‘Pain Into Power’ highlights the unhinged production of Jones and shows Terror are even more aggressive than ever.

For two decades Terror have been a constant presence in the world of hardcore. The long-running band have toured and released new music relentlessly, managing to keep up an unparalleled level of intensity that’s made them one of the genre’s most respected bands. Now with Pain Into Power the band are drawing a line between their past and present. Where many bands would rest on their well-earned laurels, Terror pushes forward, and with Jones returning to the fold they’ve created created an extraordinarily crushing album that’s essential listening for any fan of aggressive music.