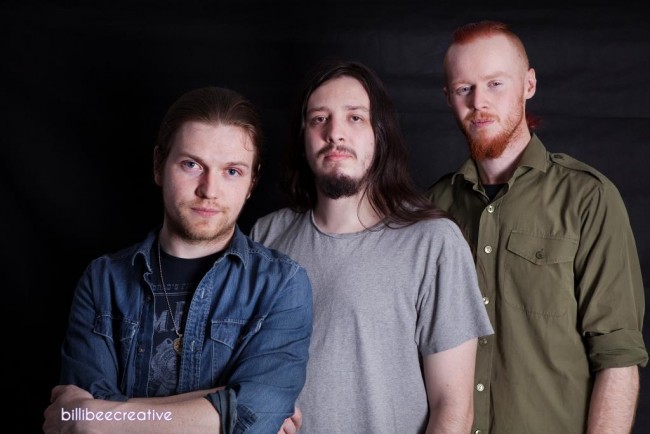 The frontman on Birmingham’s up and coming Celtic metallers on: their first tour, diversity, future plans and equality

It’s been a whirlwind 18 months. What’s the highlights?
For sure. Highlights for me are the people we’ve met and the progression of the band’s performances and writing.

The debut EP has received rapturous reviews but how do you feel about it now it’s been out a couple of months?
If I’m honest we are very proud of it as before but are looking onwards. We have some seriously good new music ready that we are now focusing on and very eager to get out there. “Dried Bones” will always hold a special place though being our first proper release.

The three of you all have very different influences and seem to be different personalities. Is that what makes your sound so different?
I think it’s a big part of it. Tom is a full on Metalhead, we all are of course, but he is into every sub genre and the much heavier stuff, which shows in his powerhouse drumming. GMT is a punk who’s favourite band is Iron Maiden and he has come up with a couple of our best ideas that sparked me to write some of our best songs, including “Hide In Sides” and Feed The Fire. I am into Metal, especially Tool, Godsmack, Priest etc. However one of my biggest influences musically is Celtic music and World Music, Native American stuff etc. So add those influences with a dose of not giving a fuck about what people think of us and you get Torous’ sound.

It very much feels like the end of the beginning for the guys. What’s next?
We have some exciting developments coming in early 2016. The band seems to be on a bit of a roll so we wanna continue moving forward and hopefully everyone will stick with us and continue the journey onwards. You haven’t seen anything yet.

The artwork for the record is very distinctive. Who had the idea for that?
My mate Peter Tinkler (www.Petertinkler.com) painted it, magnificently I must say, I mean I think it’s just amazing. I came up with a loose concept and he helped me develop it to where it is. His work is of a high value and at humble rates, so I recommend people reach out to him if in need of Artwork.

Now, your first tour. You must be pretty excited?
Absolutely! Can’t wait man. We’ve built up a neat following in the West Mids and of course are continuing to build that at home, but we are also now ready to get out to the rest of country and show people what we can do and represent our folks and town. It will be one of many and we will go further and further each time we hope.

What do you know about the other bands on the revolving bill with you?
Well Theia, Children Lost In Time and Quiet The Thief have all been selected for the tour because they are ace bands. I must give Andy from Twisted Ninja Management the credit for setting this up with us and selecting the bands. I haven’t seen them live but have heard good things and I’m really excited to be cracking open a beer after the shows and having a chat. We are all in this together after all. We succeed as a scene, and every band making it happen is making it happen for every one else

If I’m sitting with you in two years time, say, where would you want to be?
Headlining one of the bigger O2 Academy rooms and smoking a cuban cigar. (Knowing our luck it will be a pub in Digbeth and a bottle of frosty jacks).

Finally, you in particular have very definite political views. You must be sad to see the news from around Europe daily at the moment?
I think what has developed with the refugees is horrific of course, I think we need to practice compassion first before thinking about policy. Compassion is for ourselves as much as the person we’re helping. Things like this divide public opinion when they don’t really need to.

We tend to see things so dualistically when in fact – there is no need to. You don’t have to be right wing to appreciate a sense of nationhood/pride in your country and disagreeing with EU membership. You don’t have to be left wing to appreciate giving people in need a safe haven, or be against war or the occupation of other people’s land or allow equality to have it’s day.These labels were given to us to separate us from understanding each other’s principles on the important matters, I think, and it’s very possible both views can function in the same space. I just try to take each event on it’s own merit.