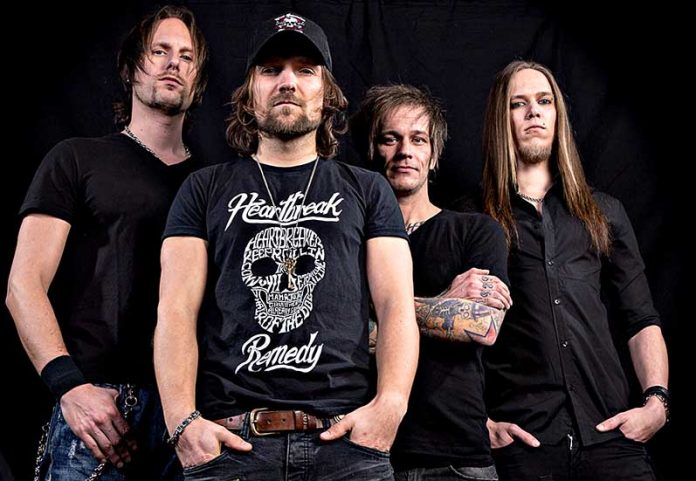 The band had their ultimate breakthrough when their second album ‘One More For The Road’ climbed into the Top 20 of the German Official  Album Charts in 2017. The album received rave reviews from the British  media. Powerplay Magazine said, “an album for any self-respecting hard  rock fan.” The album was released by Napalm Records (Universal) with  whom the band signed and international record deal in 2015.

The New Roses’ song ‘Without A Trace’ was featured on the soundtrack of the US cult series Sons Of Anarchy and was chosen as the official  song for the German DVD trailer campaign. The band is often compared to Guns’N’Roses, AC/DC, Kid Rock,
Aerosmith, Metallica or The Black Crows but with their own unique rock and roll style.

We caught up with the band for a little Q and A as they were ready to go the US.

With ‘One More For The Road’ you hit the Official German Album Top 20 Sales Charts and received a lot of radio play. Tell us more about the album and what its success was like. It is our third studio record and we showed our affinity for country music. All three singles of the record are mainly influenced by that style. It’s still straight up rock and roll, don’t get me wrong, but it has a certain feeling to it, you know?

What is the idea behind the album title ‘One More For The Road’? Since the beginning of the band we defined ourselves as a live band. We belong on stage. And the more successful we got the more offers we got to play. So, during the last three years we’ve been touring non-stop. You really experience the ups and downs of this kind of live style. ‘One More For The Road’ is the title track of the album, the song represents how we feel a lot during a tour. And sometimes that’s two completely opposite feelings at the same time.

Since the release you have been quite busy, any highlights so far? I’d say “Hard Rock Hell” in France was pretty cool. But we’ve played so many festivals in the last two years that I used to visit as a fan, dreaming of playing there one of these days. Playing the UK is one of those special things for me. The UK and the USA are perhaps the most important countries when it comes to Rock and Roll. Having the chance to play both of them now feels unreal.

Are there any anecdotes you can share with us? The best ones are secret, of course 😉 But I could tell you about drunk girls crashing our merchandising stand, tour busses drowning in the mud during hard rain at a festival, skinny dipping in the freezing cold ocean up in Norway, spontaneous live performances during a flight and many more…

How excited are you for the Kiss Kruise? Actually, I’m at the airport right now, waiting for the flight to Miami. It’s our very first US show and it’s with KISS, man! How excited would you be?

What are you looking forward to most when coming to tour the UK in November? I love the energy. Rock and Roll is present everywhere you go. The audience is so powerful and very authentic. Like I said, the UK is one of the two most influential countries when it comes to Rock and Roll. You can really feel that! And I can’t wait to meet our UK Fanclub members.

What’s the best gig that you’ve been to, or has inspired you the most? I’ve seen so many shows in my life but Springsteen, Aerosmith, Lynyrd Skynyrd and Bonnie Raitt are definitely in my top ten…

Do you have a pre-show ritual? If so what is it? I warm up my voice pretty intensive, I listen to music that makes me wanna play myself. And I joke around with the guys to get into the right mood.

How do like to relax on a day off during a tour? I try to see as much as I can of the city we play in. And I try to keep my mouth shut 😉

What is the one item you can’t go on tour without? Headphones. Cause if we weren’t The New Roses, we’d be The New Snorers. I wouldn’t survive a single night, believe me 😉