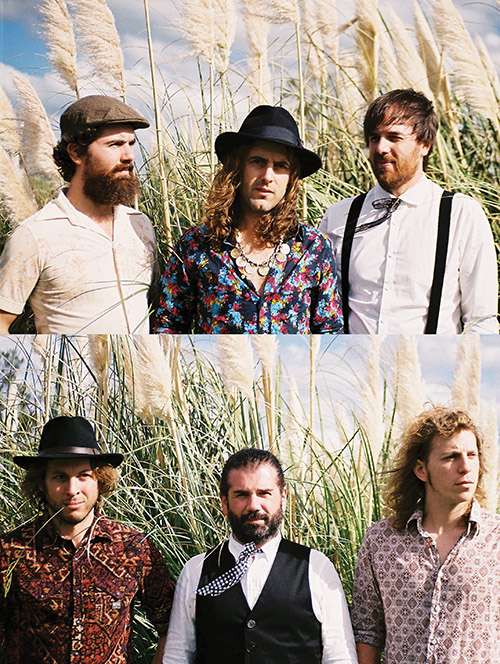 Jorge Balas  guitarist of the brilliant Aussie band My Dynamite on touring with Skynyrd, new albums,  being pathetic at being  rock stars and why Zappa was right

You’ve just released your new album “Otherside” To start with a few on the record itself…First place to start: It’s been five years since the debut. Why the gap?

Absolutely pathetic at being rock stars actually, we’re really not under any illusions of grandeur that would have us believe that we’re required to meet the insatiable needs of a big record label or anything! Actually, the lot of us have been quite busy with home life, Pat Carmody has become a father, made two beautiful young sons since the last album, I’ve been right into my studies, and the other guys have been digging into their full time jobs and careers. We didn’t mind taking our time doing this record, its not like we spent months in the studio either. If I were to count all the sessions we had, all up it would have been about 3 weeks in the studio!

Tell us a little, if you can of the writing process for you guys? Quite often I go into the rehearsal space with a loose structure and we all contribute to building up a song from there. Pat or Travis tend to provide many of the lyrics when a song is born this way. We can sometimes spend a few hours shuffling up the composition till it feels right, we try a load of different things, always pushing ourselves that little bit further. Other times I’ve had a complete song written and set out to the point where its been played acoustically and I can hear the band instrumentation in my head, so we go in and jam it out till it matches what I was originally hearing. It gets really interesting though when the original blueprint for a song doesn’t work out and changes almost completely, its great to be in a band that can all contribute to the songwriting process once it comes into the room without losing the overall vibe that has helped us create our sound. I find so many bands that share the creative process can really water themselves down this way, or more importantly never find their sound because of it, so we’re lucky to have a balance.

The Black Crowes are one of my favourite bands and MD have the same vibe and I wanted to ask about your influences. Think of Australian hard rock, and you wouldn’t necessarily think of a band that sounded like you guys. Were you always planning to be in a band like this?

Australia, and more so Melbourne is a real ‘mixed bag’ when it comes to music, and not only music, but everything, we live in a very diverse city. I must admit, My Dynamite did try to sound like AC/DC in the early days, although around the same time I was experimenting with various open guitar tunings courtesy of Keith Richards in open G, Ronnie Wood and Duane Allman for Open E, etc. I was in heaven the first time I really caught onto the Open G stuff, digging deep into the Rolling Stones sound and discovering the Black Crowes and how they lifted that old school sound and made it fresh, it sounded so big and timeless, I lost interest in power chords almost immediately after that. Pat’s lyrics were a natural fit for this rock and roll style, and we cultivated our sound like a few kids in a candy store trying new flavours. I started to write in open G, and we played these songs live, and it was so cool, girls would dance at our shows. We knew then we were onto something good and different because they weren’t dancing for any of the other rock bands.

The country influences particularly on “So Familiar”, “Can’t Tell Lies” etc, where does that come from?

I’m a bit of a Gram Parsons and Waylon Jennings fan, I had a mixed CD of these guys that had been stuck in my tractor’s CD player for years, so it was the only thing I could listen to whilst I ploughed through them golden plains! I was an orchid farmer in a town called Gisborne, in central Victoria. Benny also listens to country music, he took up the pedalsteel about 7 years ago and he’s now officially rockin it. I guess that’s where the influence for these songs came from.

Now some about live schedules. Sorry for the obvious to start but touring with Skynyrd must’ve have a thrill? Give us an insight into it?

It was truly an honour and a blessing to have been given the opportunity to open for one of our most influential bands. It was the first and only time we had played a stadium and we all feel we did an amazing job at it. The crowd loved us, we loved it, we wanna do it some more!

Being Australian must present its own particular set of issues in terms of touring, how do you overcome them?

You don’t. It’s the single biggest problem with living so far from the rest of the world, and not only that, its even far from city to city here, so touring Australia is a costly operation, Europe or US can be next to impossible unless there is some form of strong financial backing.

The sound you guys have is huge over in the UK right now, will you be looking to get back to Europe?

I would love to go back and play some shows, we missed the UK last time, so I would like to experience that. There are a lot of things to consider if we looked at touring internationally again, foremost it would have to be a financially sustainable move for starters, but anything is possible with us!

Following on from the last question…The current boom in what gets called “retro” rock, what do you put it down to?

Without getting too philosophical, I think with this whole Western collective thought process we find ourselves in right now, it makes people feel safe to label everything and anything that stands before them, and its all about nostalgia, I remember a quote by Frank Zappa in his book: ‘The Real Frank Zappa Book, published 1989’

“It isn’t necessary to imagine the world ending in fire or ice. There are two other possibilities: one is paperwork, and the other is nostalgia. Eventually within the next quarter of a century, the nostalgia cycles will be so close together that people will not be able to take a step without being nostalgic for the one they just took. At that point, everything stops. Death by Nostalgia.”

Says it all really!

And what about back home, what’s it like over there for a band making their way?

We all have jobs and here to sustain ourselves and our families, it would be nice if music could pay the bills for us, but we have yet to find the magical formula to make that happen. I’m sure there are a lot of bands out there living the dream and making ends meet…barely, but I don’t believe My Dynamite want that, we all enjoy what we do, we have families we love to be around, and we enjoy making music, if it grows into something more involving then that’s great.

If we get the chance to do this in a year say, what do you want to have achieved, or don’t you set goals like that?

I personally would really like to play a few shows in Japan, if we could make that happen, I’m sure we would all be over the moon. Otherwise, we’re happy to plod along and play some local shows and maybe start writing record number 3!

Lastly, there won’t be a five-year gap to album number three, will there?!

You betcha! Although we are looking at a live album a bit further down the pipeline, which really I’m really excited about the possibility of releasing, I’m a huge fan of live recordings and I think we would do it well!