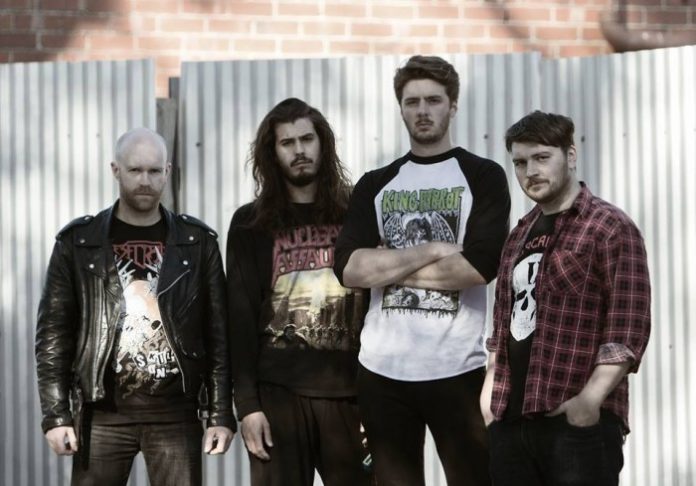 The Harlott singer on touring Europe, the Thrash revival and why they’ll never “go hard rock”

This record sounds like you were having fun in the studio?
Recording can be a pretty painful process when it wants to be. Long days, repetition, its like any other job really. You gotta find a way to make the process fun, or you’ll end up hating it. Luckily we are Australian, and being dickheads keeps us pretty amused.

Wearing your influences on your sleeve, do you worry about comparisons or welcome them?
Comparisons to awesome bands are flattering! And often pretty accurate. We listen to the titans of thrash metal, and they inspire us to write our own music.

Where do you feel this album differs, say, from your debut?
Its definitely a more flat stick album. Faster and angrier and more intricate. We wanted things to be a little darker on this release and we feel we managed to bring a little evil into some of the songs.

On my review for the record, I wrote that one or two of the songs have an “unconcealed malice” is this a way to get your inner anger out?!
Hahahaha yeah, we are pretty happy guys so obviously we siphon it out on stage in the music.

The tour with Annihilator, that must be great. What are they like to tour with?
They’re a good bunch of blokes with senses of humour about themselves. Its been a great experience so far, and we are actually gonna miss them when we have to head back home.

Being from Australia must present its own particular issues in terms of touring and so on?
Well, its expensive to say the least. Flights alone are a massive expense, and the Aussie dollar is going to shit so we cant afford to do much when we are on tour. Touring within Australia is also a massive hassle. 10 hour drive minimum between each major city. And roadtripping in 45 degree heat is not fun.

Over the last few months it’s been noticeable that there’s more and more great thrash emerging. Do you think the time is right for what we might call “a revival”?
That does appear to be happening, and hopefully it continues because this touring Europe thing is awesome, and if we can keep doing that, that would just be great.

You guys have achieved such a lot already, but what are your aims?
Honestly, everything thats happening is such a shock that we will just continue to do what we do and see where it takes us. We’ve got another album in the process of being written, and hopefully label backing for that one too, so if things go well we have a good chance of getting to  make a bit of a name for ourselves.

Do you think you’ll ever “do a Megadeth” say, and make a hard rock record, or will you always be thrash band?
We have no intention of doing that. No disrespect to Megadeth and all the other bands that slowed things down and tried something new, but thrash is the plan and thrash is what we will do.

Finally, of all the highlights so far, which would you pick as top?
We played a show in Serbia a short while back, and for some reason the crowd was rabid. They were cheering as we sound checked and the just went mental for our whole set. Not to say that the other shows were no good, but it really hit us that night, that we were on the other side of the world, and people were loving what we were doing. Its a good feeling, and still very surreal for us.

Proliferation is out now via Metal Blade