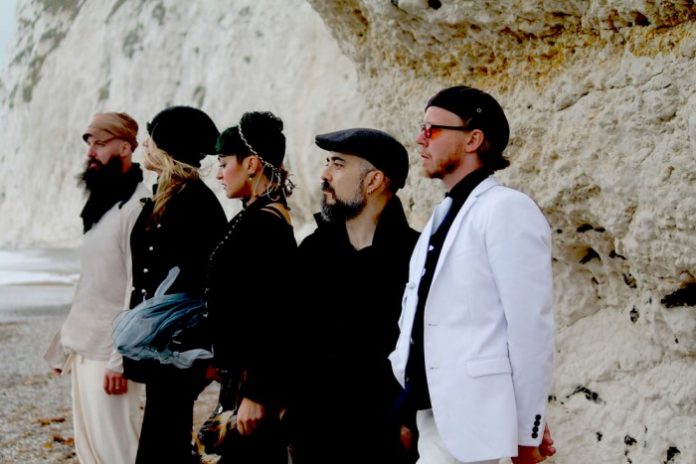 You guys have laid out on your website, the innovative way you made this record. I know this was a new way of working for you. Was it always the plan to do it this way?

(Karl answering) Hello, and thanks to take the time for the interview. Yes pretty much so. I had been recording and storing ideas for a while, little riffs, chord progressions and basic songs but when I started to to with Keith via skype and on social media the whole project gathered momentum. It was a new and refreshing way of working but then I had Elisa coming over to my studio to work on the keyboard pars and that part of the work was a little more traditional so to speak. We spent time listening to music and comparing ideas and then record bits in between. With Mattias it was again the same, sending stuff to each other. He recorded all his drums plus a lot of other pads, synths and analogue instruments.
It was then just the small matter of putting this all together in a coherent way. Making it sound somewhat natural, consistent and rich in texture and, hopefully, emotional content.

Is it a way of working you might look at again?

YES, most definitely for the next Vly album. I think this way of working fits us very well and I think it also fits the kind of music we tend to gravitate towards, Of course it all depends on the kind of music and kind of production you aim for. For other things I would still prefer the more traditional way of working .. ie. Getting together and play on ideas etc.
But the technology that is available now, and it is silly not to use it.

Do you think that VLY might eventually become a more, lets say, conventional band?
Well, there are some logistic issues. Me and Chris live in England, Keith in NY, Elisa in Italy and Mattias in Stockholm. So to a certain extent we will never be a conventional band and we might as well embrace this fact. There might be a time when for specific projects we will have to work in a more conventional way. But as I said, the whole remote collaboration thing seem to suit us very well.

And finally on the making of the record, everyone has a disparate background, how does it sound so cohesive?
Well, that is achieved mainly by communicating openly and then to a lengthy production process. Once everything is in, and I mean all the parts for each song, well, that’s when it’s time to roll up the sleeves. I believe I work in a very instinctual way, I don’t plan things out in specific way like… this song is meant to sound a bit like that or like this. I just listen back to what is happening in any given song or whole project and sort of take note of where it is leading towards. There’s a kind of split personality game at play here. On one side you write music, usually in the early stages, and it is something very impulsive and somehow even mysterious. On the other hand you have to manage the ideas in a more detached and somewhat respectful way. You become a listener In a very active way. You try to tie things together, give full voice to something that is already there. That’s were a cohesive sounds comes from I believe.

Moving on to the present and future plans
This band has a constantly and never ending flow of ideas, music-wise but also on how to deal with things behind the scenes so-to -peak.
We are working on new material but also planning a couple of other projects. Some of which will be announced very soon I hope.
In the meantime we are also working towards some live shows and tours for next year.

The album has been out a few weeks now, are you pleased with how it’s been received, or does that not worry you?
I am not that worried in general. In rather concentrate on the creative or skills side and always progress in the way I play, write, produce or understand music. The album, and the whole band, was also a test to see if this way of working and me writing, producing and engineering a records in these circumstances could work – also by the way working on a close to £ 0 budget.
And yes, it can be done. It has been a great enriching experience and it will continue in this way.
On the other side reactions, comments and reviews have been overwhelmingly positive and supportive and we are very grateful for that. I don’t ignore it nor I take it for granted. There’s a lot of great music out there and if people invest their time or money on this band then we need to acknowledge that. And we do.

What about future plans. Given the sort of start you had, I’ve seen live shows are possible. Will it be the band that played on the record?
As I mentioned we are working on new material but we are also working towards some other projects. Playing live is one of our objectives for the new year. Of course we are all involved in other bands or work we need to attend. Plus the geographical situation makes it harder for us . But I am sure we will get to it. We had few offers already but we want to run this band in a very sustainable way. We won’t jump on things just because it sounds good. We need to be careful with any decisions.

And what about album number two? Any thoughts or will there not be another record?
There will be a new album in the new year. Hopefully the production will also be a little more streamlined this time.

Which do you prefer, working organically, or technology based?
Probably I lean towards the more technology based work. It just gives you the time and ease to really dig deeper into any material you are working with and it’s always such a great learning experience. On the other had there are things that can only work with a more organic approach. For example if you work with something more “improvisational” in approach, say Jazz or more “Jam” things. And I do enjoy that a lot and try it as often as I can. I am lucky to also play with some very talented jazz musicians occasionally and that is so good for your ears…. and fingers!
Prog rock is clearly undergoing a boom time right now. Do you have any thoughts as to what this might be down to?
Part of it might be the advancement in music technology we were referring to. Progressive music tends to favour good productions and complicated arrangements which until recently translated into hefty bills from the recording studios.
Of course this is also the result of some artists, bands and record labels which have carried this kind of music into what it is today, Their contribution can not be underestimated.
I also think Progressive music has shed some of the excess it might have had in the past and is now very open to crossovers, somehow also more accessible, and I mean it in the best possible way.
A question we try and ask: has there been a band or an album that has really impressed you recently?
Oh dear. There’s so much great music out there. And I tend to roam a lot listening to anything from jazz and blues to post-classical and soundtrack kind of things. I am probably not the right person to be asking this. But maybe I can post some playlists for whoever is interested.