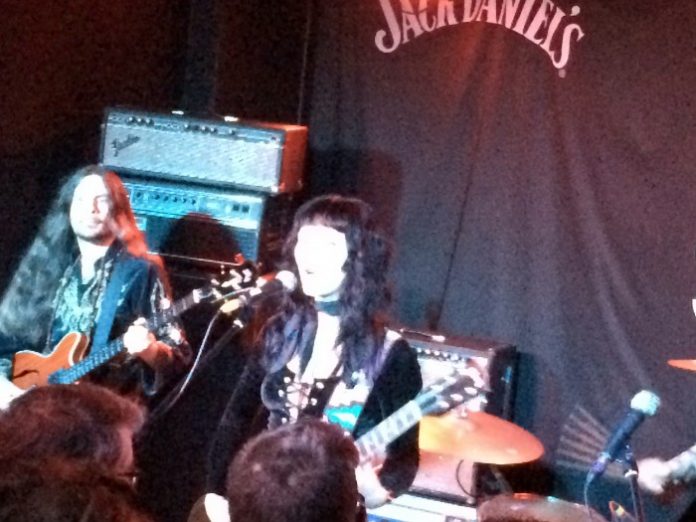 The Electric Landlady stops off in Brum

It’s not every day that you go to a gig and see a lady in black velvet jump suit blowing a kazoo in the first song, is it?

We lcome to the world of Purson.

The velvet-clad woman in question is Rosalie Cunningham, who is the Southend based bands singer and rhythm guitarist, and her performance this evening is hypnotic and striking as she provides a focal point for their entire performance.

It’s safe to say that there is a buzz surrounding Purson at the moment – and their delayed “Desire’s Magic Theatre” album is finally out in April. The anticipation is such that the tiny Sunflower Lounge is packed to the rafters and about a million degrees when they arrive, and Cunningham blows on the aforementioned instrument at the end of the new albums title song, which doubles as opener here.

There is plenty from the new record and if the suspicion is that it might be very good (it is, MV has heard it) then there is an evident confidence from the band that it is pretty special. Certainly it’s first single “Electric Landlady” (perhaps the best song title of 2016) is an absolute belter, a swaggering thing with a huge hook, and there is enough light and shade in this 75 minute journey through this wonderful musical mind to keep anyone happy.

Whether it’s the intricacies of another new one “The Window Cleaner” or the more in your face doom laden pair of “Spiderwood Farm” and “Leaning On A Bear”, whatever Purson attempt just works. They have the talent and the ambition to pull it off too, as”Mr Howard” – also from the “……Theater” record, gives Cunningham the chance to really stretch her vocal chords, and “The Sky Parade” sees her mesh with guitarist George Hudson superbly.

If the excellent “Tragic Catastrophe” would usually see them troop off for an encore, Purson are sensible enough to not attempt such a thing here. Not because they don’t deserve one but because they are – literally – all dressed up with nowhere to go here, hemmed in on on the stage as they are.

In fairness, that’s about the only constraint they are under here, as the music soars and explores where it chooses to, as the finale of “Wanted Man” proves for one last time.

A band with quite obvious crossover appeal, a good dollop of class, and a strangely brooding stage presence and the imminent release of the new album will surely move them up a notch or two. In that respect, this fine show and this might be the last time we get the opportunity to get up close and Purson-al before they truly hit the big time.