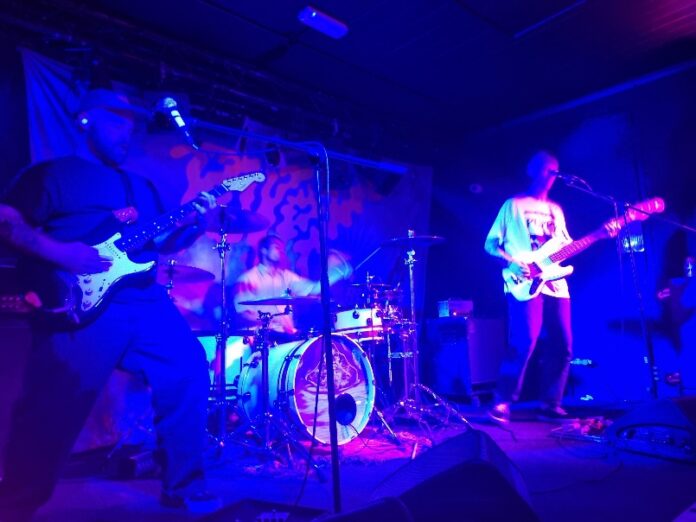 Oversize have been supporting Puppy for a couple of weeks now, and frankly there’s no better band to do it. The Salisbury band have a bit of the headliners about them, there’s riffs, there’s a bit of shoegazing (something that frontman Sam McCauley takes pretty literally), and in amongst it all there’s some fine songs. “Spin” being one of them, “Drive,  the one that guitarist Lewis Emm – perhaps the most gregarious member of the troupe –  reckons is “the best song as it has the most streams on Spotify”. A band pretty much in their infancy, they play a new song which McCauley introduces as “Hello”, before adding “it’s not, it hasn’t got a title yet”. It’s a good one though, and one which suggests – rather like the set as a whole – that Oversize could be set for big things.

When Puppy come onto the stage, MV takes the pic we always do and put it on Twitter. By the time they’d finished someone had replied “can’t wait to see them at 1000 Trees, love the whole Van Halen vs Grunge vibe”.

Van Halen, of all the things I’ve compared the band to, wasn’t one that I’d considered. That just goes to show, I suppose that this is a band that is so, so hard to pin down.

Their latest record, “Pure Evil”, continued their vein of form and the band clearly believe in it given that almost half of it is played.

Partly because of the curious layout of the venue the trio walk through the crowd to get onto the stage. If you didn’t know it was the band you’d assume it was three of the crowd that had arrived. They are unassuming and not even remotely rock star, but my, what a glorious noise they make.

They are, with the absence of anything remotely resembling a gimmick, save for their fake flames at the front of the stage, amongst the most captivating, mesmerising groups there is.

As on the record “Shining Star” acts as the opener, but “….And Watched It Glow” follows in a switch. In truth, though, it doesn’t matter what they play, given that no one really sounds like Puppy. No one really sings like Jock Norton, and no one hits the kit harder than Billy Howard Price.

Back in 2019 they’d just released one of the best albums of the last five years, “The Goat”. Packed full of brilliant songs, and possibly the pandemic stalled them a little bit, “Black Hole” underlines its class, while “Powder Blue” (complete with its screeching solo from Norton) is one that seems to matter.  The band is capable of some real heavy metal moments too – witness the breakdown in “World Stands Still” –  but “Glacial” is as big as its title and perhaps at the other end of the scale.

The one thing they do that everyone else does, as it were, is the singalong in “The Great Beyond” and the one change in vibe is the early tune “Here At Home” that Jock does solo.

The Price and bass player Will Michael return (“oh look who it is, Beavis and Dickhead” Norton laughs with the easy way of a band that are friends first and foremost) for the first song they ever wrote, “Forever”, but only after a snippet of Pearl Jam, which Norton seems to enjoy less than his bandmates, lets put it like that…..

There’s no encore – it just wouldn’t have been right for the band – but “Entombed” is a proper metal, raucous end.

That ends an hour that it is tough to sum up, given that the sounds they create are not like anyone else, and the way they deliver them is so understated. The overwhelming sense, however, is that this is a group who exists on its own terms and makes the music they want to in the way they want to do it. Puppy, like you hoped they would be, are as unique as they are brilliant.