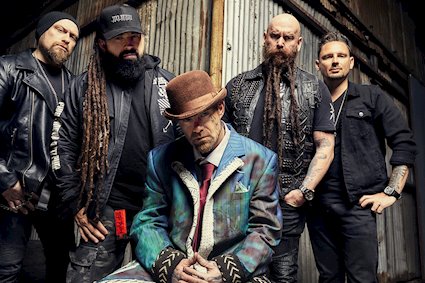 Multi-platinum hard rock powerhouse, Five Finger Death Punch, today release a lyric video for “A Little Bit Off”, a track taken from their 2020 album “F8”. The track was a huge fan favourite and the lyric video is a welcome return to a classic slice of FFDP.

Five Finger Death Punch once again broke records with the release of their ninth studio album, “AFTERLIFE” as they officially scored the most #1 albums on Billboard’s Hard Rock chart, having hit the top spot with seven separate album releases. https://5fdp.ffm.to/afterlifealbum

The band also recently started a massive 2022 Fall Arena tour with multi-platinum country rock artist, Brantley Gilbert. The artists collaborated in 2019 on their #1 hit, “Blue On Black” which has garnered over 110 million YouTube views and 62 million Spotify streams. The US Fall tour, with support from newcomer Cory Marks, kicked off in Grand Rapids, MI and will hit 20 more cities before wrapping up in Five Finger Death Punch‘s hometown of Las Vegas, NV on December 17th, 2022. See the full US Fall tour routing below. For tickets and more info, please visit fivefingerdeathpunch.com or brantleygilbert.com.

FIVE FINGER DEATH PUNCH have amassed 28 top 10 hit singles and 14 #1 singles. Having become one of the most recognizable names in music, 5FDP frequently play all major festivals and sell out arenas around the world. Since their debut album, The Way of the Fist came out in 2007 the band has released eight consecutive albums, seven of which were certified Gold or Platinum by the RIAA, as well as two chart topping Greatest Hits albums. In addition, 5FDP has earned numerous national and international awards and honors over the last decade, such as the prestigious Soldier Appreciation Award by the Association Of The United States Army, an honor bestowed only upon Elvis Presley before them.