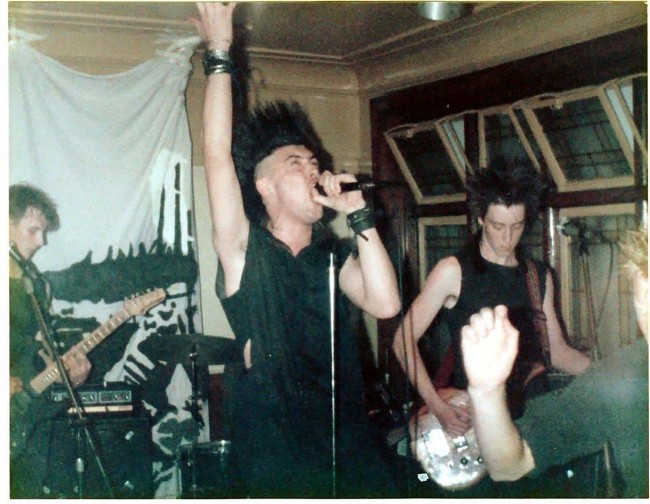 Stone The Crowz get a career retrospective.Here they are in their own words:

“1982, Death Church by the magnificent Rudimentary Peni never left our turntables and a year later we would use the above lyric to name our  little anarcho outfit. Many thought using the Z to replace the S at the end of Crowz was just a case of punk rock spelling but in fact it was to ensure we were not mistaken for the Glaswegian Blues Rock band of the same name.

“Formed in East London / Essex, a mutual love of Crass and all things anarcho first brought Trevor Speed and Trevor Delasalle together and the band was formed. After several false starts with different musicians we finally found what we were looking for in Steve Beatty (drums) and Matthew Sheath (bass). Very quickly we had a set and made our live debut supporting The Subhumans.  A baptism in fire, we were mostly awful but had a ball.

” In just under a year we were in the studio and recorded our first six track demo in 1985. All the anarcho subjects were covered but with three vegetarians and one vegan in the band our real passion was animal rights.

“We played venues in London and the Home Counties with Liberty and Exit-Stance and an Endangered Music tour with The Fiend, Criminal Justice and HDQ.

“A second demo with a much angrier feel soon followed. This time the words were backed up with members of the band being involved in hunt sabbing and other forms of direct action. Tracks from both demos ended up of vinyl: Mortarhate’s We Won’t Be Your Fucking Poor, Endangered Music’s Relying On Us EP and Punk Lives, Let’s Slam released by Slam Records.

The band disbanded soon after due to the all-encompassing phrase ‘musical differences’ with a metal edge was now being incorporated into the song writing.”

NOTE; Steve went on to release the seminal ‘Out From The Void’ EP by Antisect which helped kick start a whole new genre of punk metal/crust which in turn inspired Trev S and Matt to form Axegrinder