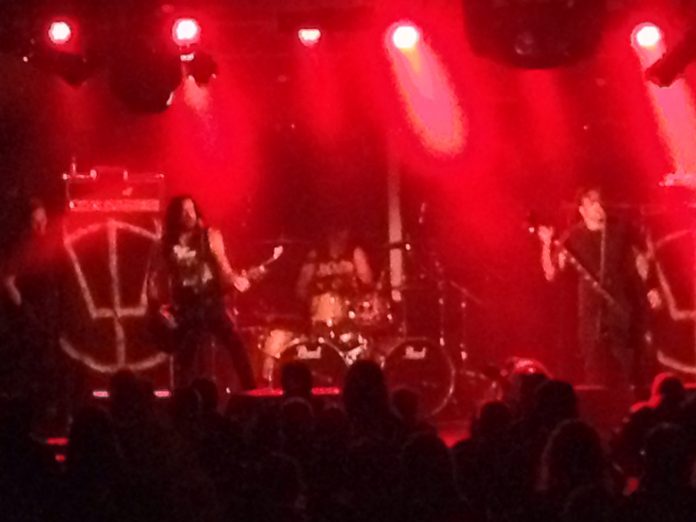 Were fingers and necks snapped in equal measure as Prong started their latest UK tour?

Steak Number Eight are the loudest of wake up calls you can imagine. The Belgian four piece sound totally on their game here. Every story ever written about them seems to have to contain the ideas that they are young and that they sound a little bit like Isis and Pelican. The former is true. Who cares about the latter? What counts is this: they are superb. Actually sounding better live than they are on record – and the records are pretty good – singer Brent can switch between melodic and heavy in the blink of an eye and the riffs might lay waste to small buildings given half a chance. The band take the chance to mix new songs with old, with “Cryogenius” remaining pretty special. The stuff that will make up their new record, on the other hand, sounds a little more psychedelic. If huge walls of heavy sound are your thing, then Steak Number Eight are your band. This is a fact for two reasons. First, the bands they sound a bit like won’t be around forever and second, when these boys lock into a groove, you try and stop them.

Speaking of groove. Speaking of heavy. H A R K’s philosophy on the other support tonight (and they are swapping order around throughout the run) seems to be one of anything you can do, we’ll do as big. This shouldn’t surprise you considering that singer Jimbob was in Welsh masters Taint. His new three-piece bill themselves as a “heavy rock power trio” and whilst that technically is true, don’t make the mistake of thinking these guys are Rush, or indeed even Motörhead for that matter. What H A R K are about is monolithic stoner metal. “Sins Of Sleeve” appears to want to crush us puny humans in its giant hands, while the bass rumble that ushers in “Scarlet Extremities” is somewhere north of mighty. In a world where musical genres are supposed to be so subdivided that they are “post” this or “core” that, H A R K could not give the remotest toss about such triviality. This is full on metal pretty much the way bands like Black Sabbath made it, and that is just about perfect.

Prong’s Tommy Victor has earned the right to do what he likes. When you basically invent a different way to play thrash metal, as his band Prong essentially did and when you’ve been in the bands he has, you can undertake whatever musical endeavour takes your fancy. So when he announced a covers album, far from the usual reaction of “why?” People instead said “why not?” And “Songs From The Black Hole” isn’t the usual covers record, either. There’s some things you thought they might do, like punk, and a spot of Killing Joke, but no one really had the Sisters Of Mercy or Neil Young pegged.

The band are proud of the thing it seems, too, as a fair chunk of it is played here. Bad Brains’ “Banned In DC” is snotty and fast, and “Seeing Red” from Killing Joke (introduced here as “our favourite band of all time”) is lovingly constructed. Both of these contain enough Prong touches not to make them facsimiles, too.

Not that they’ve forgotten their own songs are brilliant in amidst all the covers. “Beg To Differ” proves that point, while there is a kind of angular thrash joy about tracks elsewhere like “Unconditional, ” and “Eternal Heat” which sees drummer Art Cruz to the fore.

The rest is a mix of covers and originals. So Discharge’s “Doomsday” mixes with recent studio material like “Turnover,” and the piece of absolute rock and roll vitriol that is “Revenge (Best Served Cold)”

There are three in a row from the seminal “Cleansing” record. “Another Worldly Device” and it’s sandpaper feel, is thick and nasty, and “Who’s Fist Is This Anyway” is a punch to the throat, while “Snap Your Fingers, Snap Your Neck” probably carries more threat than it has a right too given the circumstances.

And what passes for an encore – the band never actually leave the stage – sees them play “For Dear Life”  and “Prove You Wrong” before the show closes.

There is a perhaps a feeling tonight from the stage that Victor and bass player Jason Christopher in particular are battling to take this show to the next level, and certainly the crowd is a little smaller than they might have hoped or are used to, but when all the analysing is over, there is an inescapable point remaining. Prong have just played live, and that’s never a bad thing.