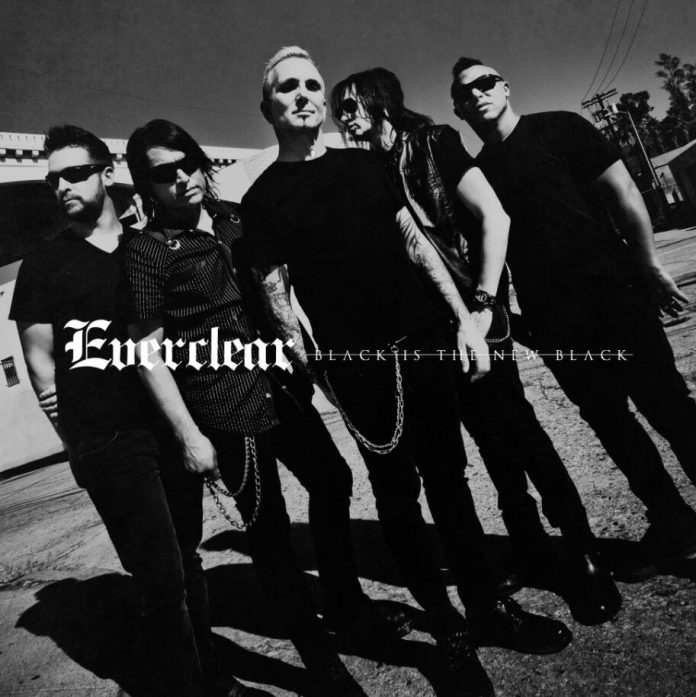 On which, Everclear re-discover the fact they are Everclear with tremendous results

In many ways you can view “Black Is The New Black,” their new album, as the band growing up, realising that not only didn’t the human race expire, but the world is even more awful than it was back then, and facing up to that reality.

In the press build-up to this, Alexakis has insisted that this is Everclear at their darkest and heaviest – and whilst you can always take these type of utterances with a pinch of salt, this time not only does he mean it, but it’s very, very personal.

It’s worth remembering that for a few albums back there in the mid-to late 1990’s Everclear could do very little wrong. On albums like “…..Fade,” it’s follow up “So Much For The Afterglow” and the “Songs From An American Movie” series, they laid their lives on the line in a collection of deeply personal songs, and in doing so provided the soundtrack for millions to get through their own troubles.

Like so many of their contemporaries Everclear split, before remerging with a slightly different line-up and if their output since reformation has been a little patchy, then very pleasingly indeed that’s not the case here: finally they have dark mojo back.

Right from the opening strains of “Sugar Noise” to the closing acoustics of “Safe” this is the best album the band have constructed in decades. It’s not just the music, although that has what you might call the “classic Everclear sound” of somewhere between grunge and punk, it’s something far more than that.

The jarring nature of the lyrical content tells you that even the band know this is special. Opening single “Man Who Broke His Own Heart” casts Alexakis as a “sad and broken” individual, and by the time we get to “Anything Is Better Than This” sees the protagonist – and on occasion, given the nature of the life the lyricist has led, it’s hard to know when the personal stuff ends and the narratives begin – back in a drugs hell and opining that “If I die it will be awesome.”

Best of all are a startling pair of songs. One “American Monster” peels back the curtains of suburban America and finds something truly rotten, and another, “You” really takes the listener on a horrible journey through child abuse.

“Black Is The New Black” is a truly brilliant collection, which would be cause for rejoicing even on a normal basis. Given that it comes from a band who you thought had their best days behind them and at best we’re going to be able to do a greatest hits tour like many of their peers, it is absolutely incredible.