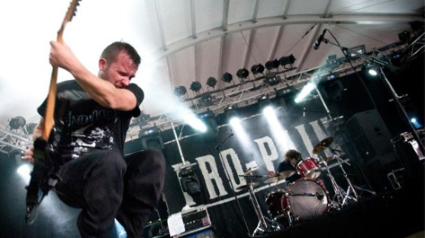 And there’s a Bloodstock show too

American hardcore metal legends PRO-PAIN are set to release their blistering, intense new studio album ‘Voice Of Rebellion’, as a 14 track CD, Digipak (with 3 bonus tracks & poster), and red vinyl (with printed inner sleeves) on June 22nd on Steamhammer / SPV. The follow-up to 2013’s hugely acclaimed ‘The Final Revolution’, ‘Voice Of Rebellion’ picks up where its predecessor left off to create an even more incendiary, uncompromising, yet utterly infectious album.

Voice Of Rebellion was recorded, mixed, and mastered by Corey Williams at Sound Lounge Recordings (Venice, Florida), with production credits being shared by Williams and PRO-PAIN mainman Gary Meskil. “This time around, I decided to get back into assisting with certain aspects of production, and we are thrilled with the end result. Corey is a young and talented engineer/producer, and the sonic brutality we collectively achieved speaks for itself (in my opinion)” says Meskil.

The album kicks off with a blistering and infectious title track (which is destined to become a PRO-PAIN classic). Songs like ‘No Fly Zone’ and ‘Age Of Disgust’ take the listener back to the band’s groove laden glory days, while new ground gets forcefully broken with tracks such as ‘Hellride’ and ‘Souls On Fire’. The entire spectrum of the band’s musical influences are proudly displayed and are tastefully explored within the contents of this explosive album.

Lead guitarist Adam Phillips states; “The writing process for ‘Voice Of Rebellion’ was a complete collaborative effort, unlike its predecessor. So, the end result is a multi-dimensional onslaught of heaviness”. Meskil adds; “This is a definitive album for PRO-PAIN, as it speaks very well for us with regard to who we are and what we represent as a band.”

Formed by Gary Meskil (ex-Crumbsuckers) in 1991, New York-based PRO-PAIN won a huge worldwide following after the release of their trailblazing debut album, ‘Foul Taste Of Freedom’, in 1992, which was subsequently nominated for a whole host of heavy metal awards all over the world. While the band’s second album, ‘The Truth Hurts’, was similarly well received, it was their third album, ‘Contents Under Pressure’, which broke through, established the band internationally, and catapulted Pro-Pain on to the headline slot at the massive Dynamo Open Air Festival in Holland. Band mastermind Meskil, an idealist in both musical and political terms, has stood by his uncompromising attitude on successive releases such as ‘Pro-Pain (1998), ‘Act Of God’ (1999), ‘Round 6’ (2000), ‘Fistful Of Hate’ (2004), ‘Absolute Power’ (2010), ‘Straight To The Dome’ (2012) and 2013’s ‘The Final Revolution’.

Following the release of their scorching 15th studio album, ‘Voice Of Rebellion’ PRO-PAIN are set to tour the US extensively, before flying in to the UK to star on the main stage at The Bloodstock Festival in Derbyshire on Sunday 9th August.

More dates will be added soon