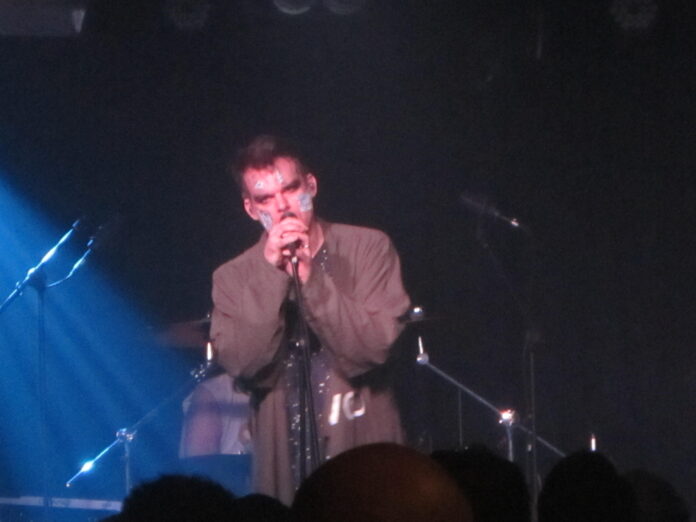 I think the name Princess Goes to the Butterfly Museum is a stroke of genius, it has that kind of sense of mystery or aura about it. So, who are Princess Goes to the Butterfly Museum? A kind of electronic, indie, avant-garde trio who formed in New York City. The band is made up of two seasoned musicians in guitarist and keyboardist Matthew Katz-Bohen who is also the keyboardist for Blondie and Peter Yanowitz who was the original drummer of The Wallflowers. Fronting them is Michael C. Hall who you might know from the legendary tv shows Dexter and Six feet Under on vocals.

Amongst the early numbers is the wonderfully psychedelic `Vicious` from an EP released in 2020 with its unnerving musical box like segment. The hypnotic and edgy `Nevertheless` follows from their debut album `Thanks For Coming` which was released at the beginning of this year. The disco like `The Deeper Down` with it flowing synth beats gets an airing along with the ethereal `Eat An Eraser`. There`s a few more cuts from the debut album as the delightfully rocky `Sideways` is pumped out, the expansive and quite dreamy `Airhead` and fast paced thumping `Angela Peacock` which the singer introduces as a song about a girl.

There`s a new song with `Take Me Home` as Michael jokes that they`re probably all new songs to the audience. The slow burn `Tomorrow’s Screams` drifts out and this intimate audience is almost transfixed into silence. The show closes out with numbers like `Jetpack` and the album title track `Thanks For Coming` which really has that Bowie vibe, which to me is no bad thing. Michael gives a shout out for a Happy Birthday to Ozzy, Birmingham`s very own `Prince Of Darkness` who is 73 today. The set closes out with one of my favourite numbers `Come Talk To Me` which i`m sure Daft Punk would have killed to write. The guys bow and take their leave after what is a wonderful mixture of tracks influenced by diverse artists such as David Bowie, Giorgio Moroder, Sigur Rós, Black Sabbath and Joni Mitchell. Indeed, guitarist and keyboardist Matthew Katz-Bohen, whose four-year-old daughter named the band has said that they can be described as Giorgio Moroder and Black Sabbath babysitting for Joni Mitchell’s niece. It`s easy to knock a band such as these but I have to say it was a cracking evening and I always admire and loudly applaud a band who are prepared to write their own original material. There`s a few more dates before the fellas head back home so if you wanna visit the museum, I’d get there as soon as you can.