We are no strangers to a festival or two. As a general rule we prefer one-off gigs, and lots of them, especially in Andy’s case (100+ gigs a year is no mean feat) but there is something very cool about spending 12 hours watching live music in one day!!

We tend to shy away from the larger festivals such as Download preferring instead to attend Bloodstock where the view is 100 times better as there are only around 12,000 hardy metalheads in attendance on any given day. However, we will not be attending Bloodstock this year, having visited the previous three. Time for a change and this year we will be fully embracing our Outlaw Country, Prog and Hard Rock side. 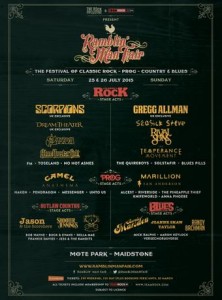 The highlight of the Saturday should be the German hard rock legends Scorpions first appearance on UK shores in a decade. They will be hoping to rock more than their car and those in attendance can fully expect for the band to put the pedal to the metal in the finest rock n roll fashion!!

The band have promised a set full of classics alongside some of their newer work and this may potentially be the last time the band play in the UK as they wind down their career on their never-ending farewell tour.

However, there will be much fun and rockin’ to do before the Scorps put in an appearance. Maximum Volume will be looking to catch Prog Metal heroes Dream Theater, Trad metallers par-excellence Saxon, US stalwarts Blue Öyster Cult, Outlaw Country six-slinger Shooter Jennings and many more.

As is traditional at festivals Andy and Donnie will spend around half the day apart in various tents catching different bands before meeting up again for the main bands that we both want to catch. That’s good for you the reader though as it means we can cover more bands.

Due to other commitments we will only be at the festival on the Saturday but it’s sure to be a great weekend for all in attendance.

Look out on the website for reviews of all the bands we will be lucky enough to catch at the festival.