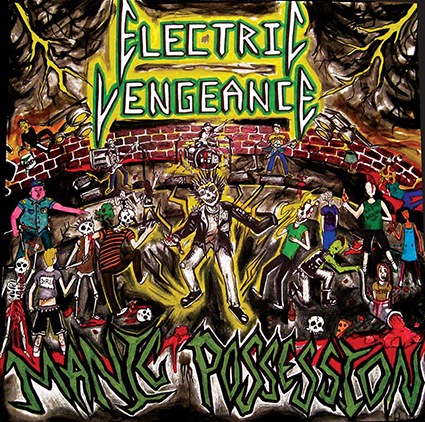 Meet the Texas thrashers who call what they do “street metal.”
Texas based Street Metal Trio ELECTRIC VENGEANCE released their debut full length album titled “MANIC POSSESSION” on April 16th, 2015. Consisting of 10 tracks in all “Manic Possession” was recorded at Valve Studios in Dallas, Texas over the course of just three days in August of 2014. Casey Di Iorio, best known for his work with groups as diverse as The Polyphonic Spree, Bowling for Soup and Slayer, performed the engineering, mixing and mastering duties for the album.

Since rising from the gutters of Grand Prairie, Texas in June 2007, these three maniacs have been on a mission to resurrect the dead by mutating their sound into a pissed off combination of Punk Rock, Thrash Metal & New Wave of British Heavy Metal with a healthy mix of attitude and offbeat humor to satisfy the rabid hunger of their ever-growing underground cult – affectionately known as the STREET METAL ATTACK! United to thrash by Bran Damage’s guiterrorizing shred-work and harsh lead vocals, Trey Lunabomber’s maniacal beats and Napaulm’s merciless bass stranglings, ELECTRIC VENGEANCE will smash your skull through your socks with their signature style.