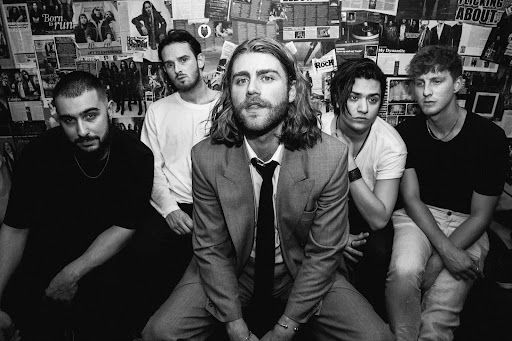 Returning with a resounding new single for Autumn 2021, GATHERING OF STRANGERS, are back with: “Cherry Red”.

With a twisting narrative cast in neon and shadow, Gathering of Strangers’ latest unfurls a tale of primal passions and romantic power-struggles, as a couple find themselves locked in a love-game where nobody wins.

“”Cherry Red” is a tale of your love/hate relationship with fear. His charm gets you in the bedroom but her power chains you to the bed. It’s then up to you whether that’s something you want to escape from or not”.

As ecstatic 80s-piqued synthesisers duel with reverb-tinged guitars and loping basslines, it’s a nocturnal indie-rock anthem that dances through light and shade; destined to lodge itself in your consciousness for some time. The track is now accompanied with an official video that aptly captures the essence of the track.

Written in early 2020, the track was finally recorded in September 2020 with David Watts at Chairworks Studios (West Yorkshire). Also produced by Watts, “Cherry Red” was mastered by Dick Beetham at 360 Mastering.

Epic and enigmatic in equal parts, “Cherry Red” fuses the impassioned anthemia of White Lies with the heart-on-sleeve hooks of The Killers; capturing the five-piece’s grand ambitions with a single that shoots straight for the big time.

One-time strangers who would go on to forge the closest of bonds, Conor, Tom, Bruce, Peter and Andre came together in the creative crucible of Manchester while studying at University. Hailing from all corners of the country and with a diverse array of musical tastes, as Gathering of Strangers the quintet came together with one shared musical vision.

Defiantly ploughing their own furrough since their formation in 2015, the band have become long-established favourites in their newfound home. Selling-out headline shows at the likes of YES, Soup Kitchen and Night & Day, entrancing sets at Dot2Dot and Neighbourhood have also seen them win over the masses with triumphant festival appearances. They have also played support shows with  Third Eye Blind, Morcheeba, Electric Six to name a few.

Flirting their promise with a more mainstream audience, GoS have released a series of untouchable singles to date, with cuts like their head-turning debut “Nice Hair“, the intoxicating “Lady“, and arresting recent single “Antidote“, gravitating ever greater audiences to their cause and receiving air-play on BBC Radio 6 Music, Kerrang Radio and XS Manchester in the process.

Offering the most incandescent signal of their bright future ahead, Gathering of Strangers prove their substance with an emphatic new addition to their canon. A new single and a taster of a brand new EP being planned for the months ahead, “Cherry Red” is released 2nd November 2021.