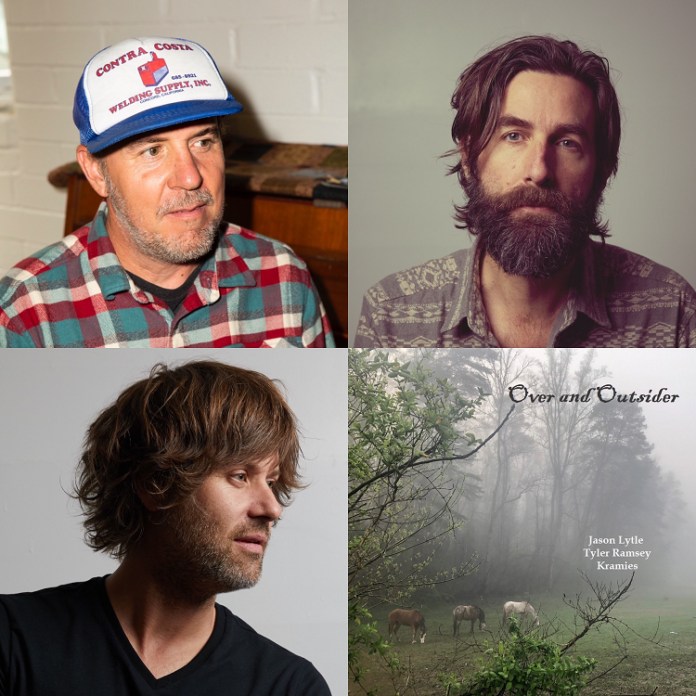 While winter approaches, the days grow shorter, and homes are dimly lit as dusk quietly creeps in, three unique songwriters come together to create a rare and special release of emotionally touching and bare singles. ‘Over and Outsider’ is the new three-part split single by Jason Lytle of Grandaddy, Tyler Ramsey formerly of Band Of Horses, and Kramies.

The chill of winter leaves many emotions hanging over us all- the need to hibernate, the longing for summer, or simply a comfort for the year ahead. However, no matter what you are feeling we can all agree that winter brings a sense of quiet ambience. Now, there is a soundtrack that matches the gentle hum that the season brings, brought by three of folk’s best offerings; Jason Lytle of Grandaddy, Tyler Ramsey formerly of Band Of Horses, and pioneer of the genre Kramies.

Titled ‘Over And Outsider’, the split single features three tracks; each unique to the individual artist’s vision. ‘Drop That Hero’ by Jason Lytle eases the listener in with stripped back acoustics and muted vocals, as Lytle muses the gentle isolation that the colder months can bring. ‘Arrow To Bow’ by Tyler Ramsey features an array of plucked guitar melodies and intricate lyricism that evoke a sense of wistfulness. Finally, Kramies’ ‘She’s Low Tide’, is an ode to a lost lover. One of the most personal offerings from the artist to date, the ballad’s soft piano instrumentals and minimalistic guitar strums let the artists longing for an unnamed partner be the centrepiece of the record- striking all who listens with its mesmerising emotional depth. When put together, the three tracks form a collection that captures the chilly hum of winter effortlessly, making it a perfect addition to the soundtrack of the season.

Tyler Ramsey – “Arrow to Bow”
“This one is made up of blurry images of touring and travel and questioning what is worth giving your time to.  Happy I was able to be a part of this project with Kramies and Jason who I love and admire as well.”

Kramies – ‘She’s Low Tide’
“This short song of closure seemed to have fallen into my lap out of nowhere while I was working on something else. I never know what these songs are about until much later, I just know when it feels right enough to pursue. These songs for me are like crows carving out shapes in the clouds, then disappearing quickly. ‘She’s Low Tide’ isn’t about anyone particular; I think it’s more about a time and space I was once in.  It felt perfect for this wintery split. Jason and Tyler are two of my all-time favourite song-creators, so this is a huge honour for me. Also, I recorded this in Nashville with my friend/producer Bill Reynolds which is another honour.”