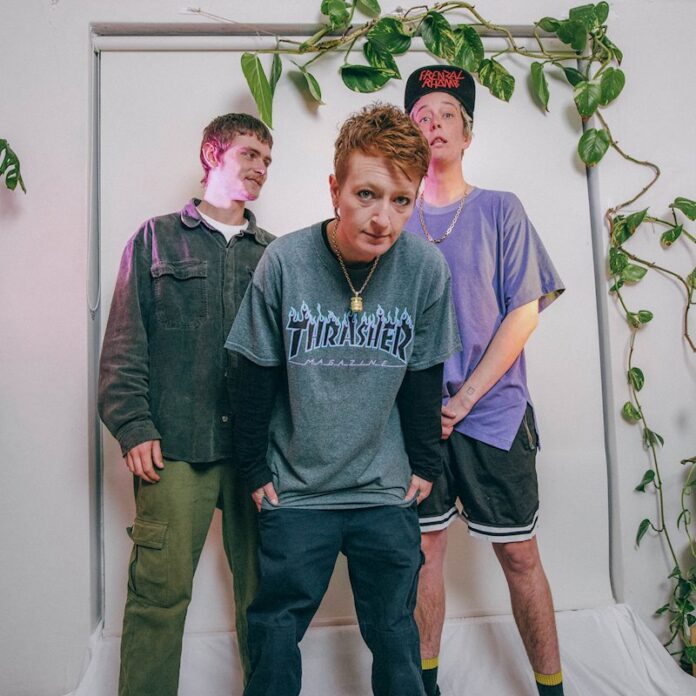 From the second the drums come in you know this song is going to be the heaviest track SCABZ has given us so far, with big riffs and breakdowns becoming a part of the band unique sound.

True to form and abiding by their own playbook, SCABZ recorded ‘Low Resolution Man‘ live in an abandoned theatre. The track captures both the intensity and isolation of PTSD with fleeting moments of insanity. If this is anything to go by, SCABZ is not afraid to step out of their comfortable zone and will let it be known that the best is yet to come.

ABOUT SCABZ
SCABZ have officially emerged from 2020 as the ‘shittest band in the world.’
After locking themselves into week of writing and recording at Defwolf Studios, the trio managed to release their debut album Pressure and audiences across the globe were suitably whelmed.
‘They’re like an Aldi Peep Temple, but I don’t hate it.’ – Facebook User
‘We are taking this matter very seriously; discrimination is not something we take lightly and we plan to use all available recourses to make sure that SCABZ stop spreading hate and misinformation.’ – The NSW Police Force
‘I want my money back.’ – You, probably

Previous article
MUNICIPAL WASTE CRANK IT UP
Next article
….RED ROSES TOO