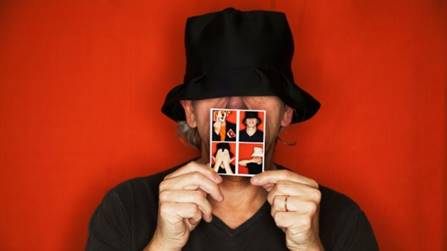 In the ‘70s he worked with The Jam and Paul McCartney. In the 80s he worked with XTC and Duran Duran and then joined The Cure. In the ‘90s he co-wrote and produced Natalie Imbruglia’s evergreen hit ‘Torn’. In the 2010’s he played bass for Bryan Adams. So what’s next?

“I feel like I’m just getting warmed up!”, Phil quips.

After decades of making records – hits and misses – for other artists, Phil started making his own under the Astral Drive moniker in 2017, a combination of seventies recording techniques, impromptu jam sessions (with himself) and starry-eyed idealism.

Astral Drive’s debut was somewhat of a curio. A collection of seventies-inspired singer-songwriter tunes with analogue production and unashamed nods to the famously maverick Todd Rundgren’s melancholic classic ‘70s albums.

The album drew fans from Phil’s days playing with The Cure and Bryan Adams but they were – perhaps unsurprisingly – also joined by Rundgren die-hards.  Some even described the ‘sonic sunshine’ as ‘the missing Rundgren album’ and ‘the fifth side of Something/Anything’.

The album garnered a modest radio hit in the Netherlands with the first single ‘Summer of ‘76’.

Phil has clearly chosen to broaden the sonic scope of Astral Drive project this time around. “The first album was made looking through a fish-eye lens of seventies sounds. This time around there’s still many of those signature sounds – over-compressed drums, over-EQ’d pianos – but I let the sound choices be freer. This time I reached from as far as the ‘70s to the ‘80s!”

From Weezer (‘For The Dreamers’), New Radicals (‘Waterfall’) and even Prince (‘Wish U Well’), the record has a noticeable pivot towards guitars, rather than the predominant songwriter-at-the-piano sound first time around.

Phil explains the last song has a particular personal message. “‘Wish U Well’ is my swan song for Astral Drive. It’s a sincere thanks for the people embracing my music over the last few years, but also to say ‘Goodbye, that was fun, but that sun has set. Thanks a million for listening. Let’s see what happens when the sun comes back round, hopefully tomorrow”.