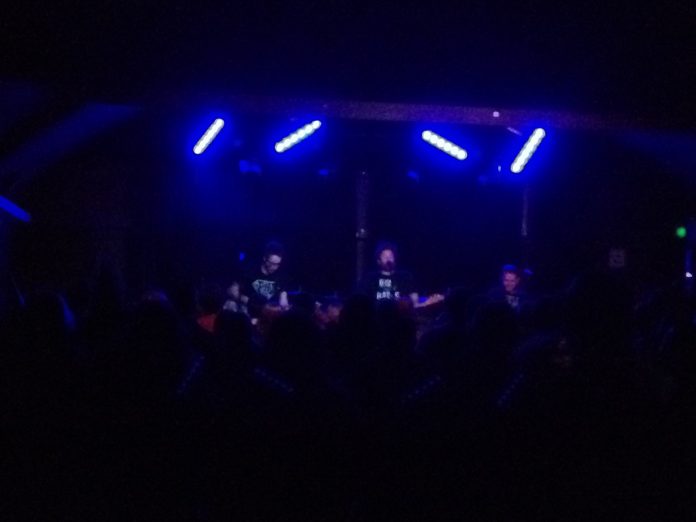 Jaret and Ryan bring their poppy holiday to the second city

Nottingham’s Lacey are a jaunty little four piece. The quartet roll along on the back of harmonious music which adds some pop punk touches for good measure. Their debut album is in the bag and it seems that – if tracks like “Change The Day” are any guide – it will a bouncy affair. Their outlook is best shown by their choice of cover, a slowed down run through Jimmy Eat World’s “The Middle.” Those that remember The Senseless Things’ circa “Christine Keeler” with fondness may find plenty to enjoy. Big choruses, and a smile never too far away, mean Lacey are probably only a few well placed festivals away from a potential breakthrough. As they put it on a Biffy Clyro-esque  balladic affair that’s aired before the close:  they could be a “Contender.”

It’s doubtful that when People On Vacation planned their stage entrance they planned one quite like this. The Go Go’s “Vacation” (do you see what they did there?) is nearly over and collective members of POV are beavering away, until that is it emerges that the amplifier needs switching on. Rock n roll huh?

Anyway, plugged in and ready to go, Jaret Reddick of Bowling For Soup, Ryan Hamilton of indie rockers Smile Smile and their mates are off with “Prettiest Girl In The World.” What PoV do so well is write ostensibly happy little tunes that turn out, upon investigation, to be fabulously bitter. “Back To Being Friends” (every man here has been, well, there) for example, wraps up heartbreak in a three minute pop song.

But then, there’s the stuff away from the music. We learn – all before track four – that Jaret (who is helpfully wearing a Ryan Hates Fun tshirt after the latter apparently was miserable on the tour bus) has no problem being naked with support bands, Hamilton’s father in law wants to punch Reddick in the face because of an anal sex “joke” and Reddick has a fear of sex with English girls as he’s worried about the meaning of the word “fanny” over here. And if that seems a world away from “hello-birmingham-how-are-ya-doing?” It’s because it is. This is a band you sense that never has tongues too far from cheeks. Like it or not It makes for an different  75 minutes than the usual.

After a shushing contest with the audience – as well has a discussion about whether Captain Kirk ever peed on Spock – the band play “You May Not Believe In God” – a frankly bizarre, but bizarrely excellent, Beach Boys style song about falling in love with the devil (we’ve all done that too….)

The revelations keep coming. Cheese is evil apparently, which is good to know. So do the songs. “Don’t Ask The Question” the lead cut from their new album “The Chronicles Of Tim Powers” is chief amongst them.

There are times when they forget the music altogether. One particularly long stand up section is filled with facts such as drummer Mickey has a huge penis and Jaret doesn’t want to get punched in the dick by Noel Gallagher. When they actually do get round to it “I Got Your Back” shimmies about on a glorious harmony.

Musically the peak – as on the record – is a brilliant “She’s Not You” which appears to be the encapsulation of all the band are attempting to do. “We Could Have Made It” is close in feel, and is pulled off with aplomb (even allowing for a lyrical snafu). And the uplifting “Punk Rock World” and “Lonely Fish” are just superb (even allowing for a segue into Puddle Of Mudd’s) “She Hates Me”).

The clue to this band is in the name. Both the main men here are doing this for love. Love of music, of course, and love of being onstage, but also there is clearly a desire here to make music together that shines through. The fact people enjoy it is a bonus. Jaret says as much, with typical self-deprecation, “most side projects are shit,” he explains. This one isn’t.

When they play music People On Vacation are very, very good indeed. Whether the frequency- and length – of banter is as welcome rather depends on personal taste. However, the bottom line is quite simple. People On Vacation have some fine, fine songs and when you strip it all away that’s all that counts.