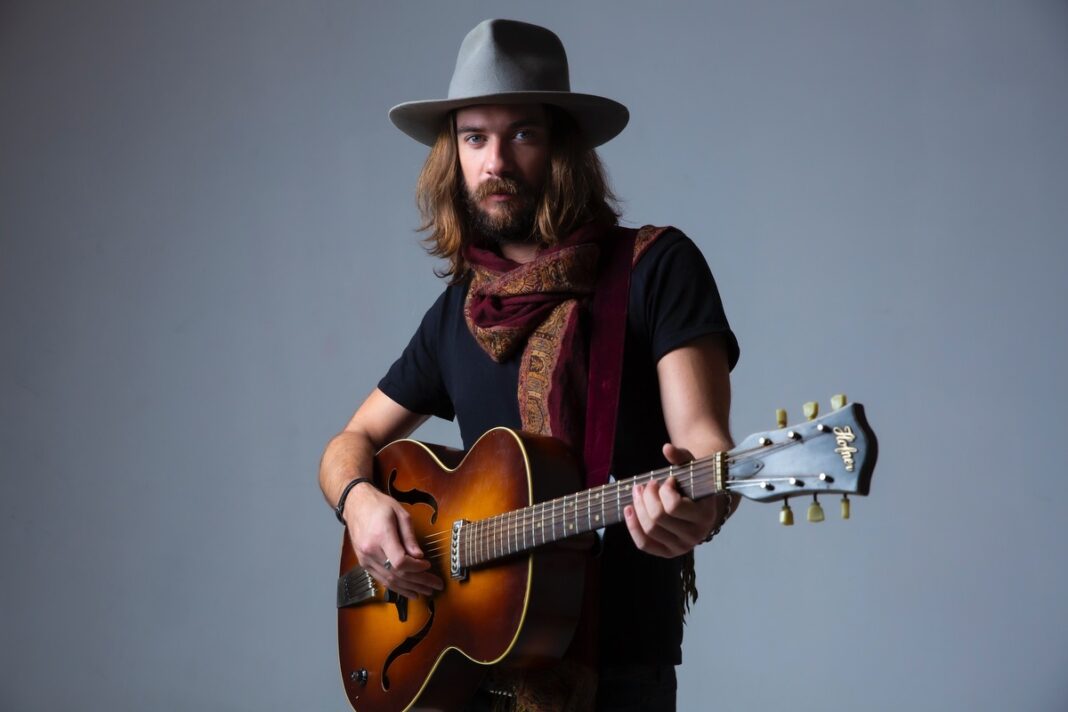 British singer-songwriter and acclaimed guitarist Jack Broadbent is used to people saying, “Oh, this is a departure from your previous stuff.” He has heard it soon after the appearance of each of his five albums to date and it will certainly follow ‘Ride’, which is released in early April and is his first full-length record since ‘Moonshine Blue’ in 2019. As someone who is as connected to the quality of his relationships with people as he is to the quality of his music, rest assured that he considers it a compliment. “I think there’s a lot of variety on my records and this is no different,” he states. “I’m really getting a sense now that this idea of genre and where you fit in is not as important as it used to be, which I think is a good thing.”

Broadbent grew up in Lincolnshire but has spent the last few years living in Canada. His earliest influence was his father Mick, who is also a musician (including a tenure with late ’70s power-poppers Bram Tchaikovsky) and plays bass on ‘Ride’. Informed as a youngster by the steady diet of music played around the house, Jack began accompanying Mick to open mic nights, and by his early teens was playing drums in his dad’s bands, gravitating to guitar when he became interested in songwriting. “Being a drummer, I tried to develop a very rhythmic approach to my guitar playing,” he recalls. “What interested me was being able to hold down a groove and do some gymnastics to incorporate solos and subtle bass lines.”

Broadbent’s renowned slide guitar playing evolved from busking regularly in his early 20s. “It seemed to appeal to people as something that was both visually and musically exciting. This was interesting to me. I was already playing in altered and open tunings, so when it came to using a slide I was well-versed in how those patterns worked together.” He took some cues from influences such as John Lee Hooker and Little Feat, but ultimately says that “I never really wanted to emulate anybody else’s style, which is why I ended up going down a slightly more hard-hitting, brash kind of route in my playing.”

Finding an audience after the Montreux Jazz Festival hailed him as “the new master of the slide guitar” and Bootsy Collins famously proclaimed him “the real thang!”, Broadbent subsequently won over more fans after touring with the likes of Ronnie Wood, Peter Frampton and other legendary talents. Meanwhile, his penchant for writing on the road ensured that there was usually an abundance of material whenever he was ready to return to the studio. This holds true with ‘Ride’, although the album took a turn from what he had originally intended.

“I had to come off the road because of the Covid pandemic and was going to work on a solo project of acoustic material,” he explains. Instead, with Quebec-based drummer and co-producer Mark Gibson, “…we started playing some of the more rock ‘n’ roll stuff I had, and we couldn’t deny that there was a kind of vibe happening. So, I just went full steam ahead in that direction which brought the sound of this album into focus. We built on those grooves and ended up with the rock ‘n’ roll record I’ve been wanting to make for a long time.”

‘Ride’ does indeed rock, with Broadbent’s natural grit, voice and guitar riding atop every song with a driving force. However, there is also stylistic diversity on offer, from the moody ambience of ‘Who Are You?’ and the title track (out now as a single), which he describes as “a tale of adventure”, to the blues roots of ‘New Orleans’, a love letter to one of his favourite cities. Meanwhile, ‘Grace’ soars with a kind of front-porch spirituality, while previous single ‘I Love Your Rock ‘n’ Roll’ is “an homage to the bands that I like” and gallops along with an energetic Americana vibe. Overall, via several twists and turns, the album takes the listener on a trip, strung together by a vision that Broadbent developed during the recording process.

“Mark and I recorded the tracks live in a small home studio in Quebec, following which I sent them to the UK where my dad added the bass lines and then sent them back to us for mixing and mastering,” Broadbent discloses. Working around travel limitations and the uncertainty of the last two years, this international collaboration reflects what Broadbent calls “this underlying theme of trying to get a feel for where you’re heading and recognising how much distance you’ve still got left to travel.”

The next step, of course, is to take ‘Ride’ on the road, which Broadbent will be doing throughout 2022, including an appearance at the Black Deer Festival in Kent in mid-June. He knows that its songs will only grow as he presents them on stage, but they will nevertheless continue to speak to the experiences from which they were born. “I really like the energy of this record,” he says. “There seems to be an interesting dichotomy between what I write while I’m touring and what I write when I’m able to sit and think. What the album speaks to is that juxtaposition between the ride and the time spent parked up. It all ties into the journey of the artist.”

No matter what lies on the road ahead, Broadbent’s fans can rely on his dedication to his music and evolving craft. Little Feat founding member and current US tour mate Bill Payne perhaps says it best when he states: “I love his voice. His playing is superb, showing an almost reckless abandon when he gets revved up. He is performing on the edge, and if he falls, so be it. The pieces will not break.”