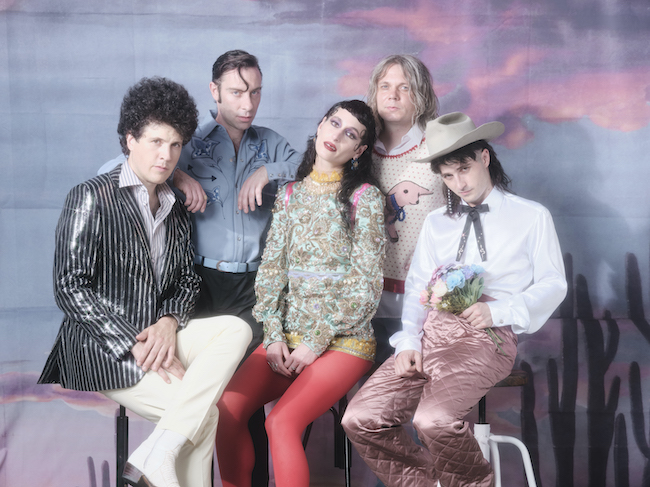 The Black Lips will release new single ‘Colt 44/Alone and Forsaken’ in support of their post-pandemic European tour on 22nd October via Wild Honey Records. It marks their first release after the acclaimed 2020 album ‘Sing In A World That’s Falling Apart’.

The A-side is a cover of composition by the late great Fred Cole, a long-time friend of the band, while the B-side is a beautifully raw rendition of a Hank Williams’ classic.

“We chose these two songs because they are both brutally beautiful and badass” singer and bass player Jared Swilley reveals. “They paint a portrait of a dark and romantic version of an American landscape from a long time ago that I imagine in my head. Hank Williams and Fred Cole are also two of my favorite Americans” he adds, “a kind of American that no longer exists”.

The two tracks were recorded and produced by the talented Nene Baratto in his Big Snuff Recording Studio in Berlin during some inspiring pre-production sessions for the latest album. They return to the raw analogue-sounding roots that marked their early efforts.

The incredible packaging was designed by the Italian artist and professor Paolo Proserpio and was inspired by the Western toys of his childhood. “When I first listened to “Colt 44”, I felt like I was living in a Sergio Leone’s movie, where the Good, the Bad and the Ugly drink whiskey in a dusty saloon with Jeff, Oakley and Zumi”, he confessed. “The feeling is to have mixed one of the Italian director’s masterpieces “For a Fistful of Dollars” with the freak characters from of our beloved Bruno Bozzetto’s “West and Soda”. Gunshots, horse chases, cowboy boots, cacti, lassos and a spectacular sunset over the Grand Canyon, where Cole and Jared stop to play the melancholic ballad “Alone and Forsaken”.

Atlanta originals The Black Lips’ stylistic evolution and matured approach to musicianship and writing are, in part, due to the seismic line-up shifts they have undergone over the last half-decade. Worn down after a decade of prolific touring and recording, longtime guitarist Ian St Pé left the group in 2014, followed shortly thereafter by original drummer Joe Bradley. Jeweller/actress (and now Gucci muse) Zumi Rosow, whose sax skronk, flamboyant style, and wild stage presence had augmented the team before the duo’s departure, assumed a bigger writing and performance role in their absence. Soon drummer Oakley Munson from The Witnesses brought a new backbeat and unique backing vocal harmony into the fold. Last year the quintet was rounded out by guitarist Jeff Clarke of Demon’s Claws. The newly forged partnership, all of whom collaborate as songwriters, vocalists, and instrumentalists, has breathed new life into their sound. The result is akin to the radiance of the impulsive, wild nights where you find yourself two-stepping into the unknown.

This brand new 7’’ connects the dots of Black Lips’ music evolution: the Atlanta bad kids have pulled through the wild days of riots and chickens-on-stage, and have grown into something more mature without losing their rebellious edge.