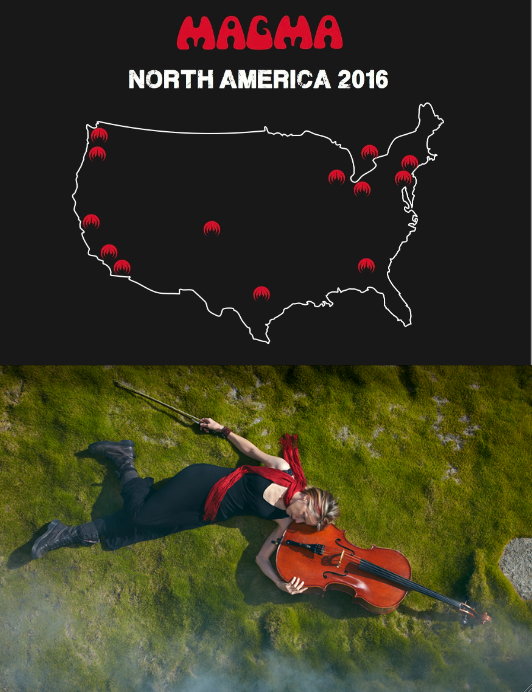 Helen Money will tour the U.S. with Magma and play all but two dates (Atlanta and Toronto). “These shows with MAGMA are really special for me,” Chesley explains. “Their music comes from such a pure, inspired place and their audience is so open minded and willing to listen. To do this tour with them is a once in a lifetime thing and I can’t wait.”
“The first time we saw Helen Money play her cello we immediately thought about former Magma bass player Jannick Top, who was also playing cello,” Magma stated, adding “Her playing is genuine and intense! It will be a perfect introduction to our show”
Cellist/composer Alison Chesley, a.k.a. Helen Money, merges her classical training with a lifelong affinity for punk rock and a taste for heavy metal. She has toured with Shellac, Bob Mould, Mono, Aggaloch to name only a few. Chesley has also recorded with and/or directed string arrangements for artists like Anthrax (Worship Music), Russian Circles (Geneva), Broken Social Scene (Forgiveness Rock Record) and Yakuza.
Helen Money Tour Itinerary (all dates with Magma, check local listings for set times):
Tuesday, March 15th at Brick By Brick in San Diego, CA
Wednesday, March 16th at The Regent Theater in Los Angeles, CA
Friday, March 18th at Great American Music Hall in San Francisco, CA
Saturday, March 19th at Wonder Ballroom in Portland, OR
Sunday, March 20th at Crocodile in Seattle, WA
Tuesday, March 22nd at Gothic Theater in Denver, CO
Wednesday, March 23rd at Beachland Ballroom in Cleveland, OH
Friday, March 25th at Reggies in Chicago, IL
Saturday, March 26th at Reggies in Chicago, IL
Sunday, March 27th at Mohawk in Austin, TX
Wednesday, March 30th at Underground Arts in Philadelphia, PA
Friday, April 1st at Le Poisson Rouge in New York, NY
Helen Money’s current release, Arriving Angels is out now on Profound Lore, and was recorded and mixed by Steve Albini at Electrical Audio and features drummer Jason Roeder (Neurosis, Sleep). Her next album will appear on Thrill Jockey Records and the release date will be announced soon.
Visit Helen Money online at helenmoney.com or facebook/helenmoneyband.com or on Twitter at Helen_Money.