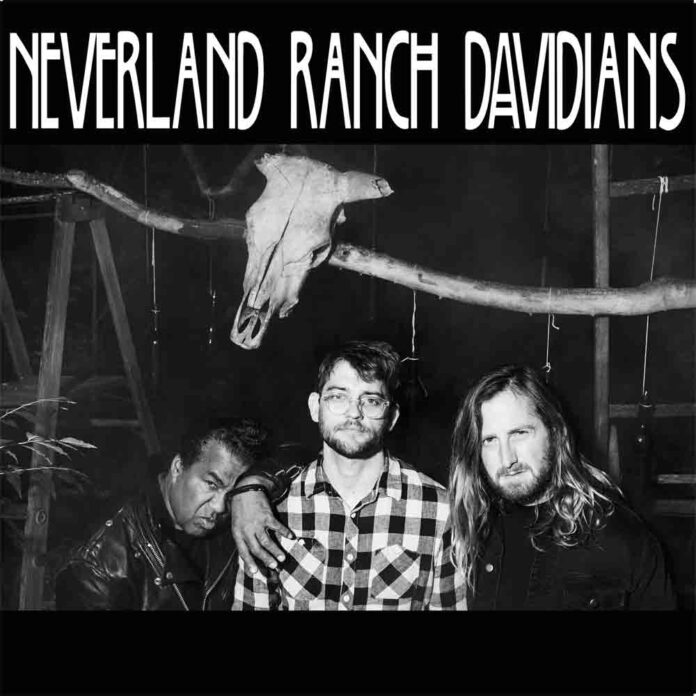 Linchpin of the band is bullishly charismatic guitarist/singer Tex Mosley: one-time alumnus of Philly’s legendary Afro-punks Pure Hell, for whom he co-wrote the track ‘No Rules’ before joining up with that band’s drummer Spider in Bad Actor. Relocating to the West Coast, Mosley embroiled himself in the L.A. punk scene, hooking up with skate/punk legend Duane Peters in Gunfight, Black Flag founder Keith Morris in Whores Of Babalon and Geffen-signed rockers The Hangmen.

But wait! It gets better! With his band The Neighborhood Bullys, Mosley was conscripted to play with Suzi Quatro on her 2011 return-to-form In The Spotlight album, including a lowdown gutter-built version of Goldfrapp’s ‘Strict Machine’.

Now, describing themselves as “garage proto-punk reprobates on the 5th day of a 4-day creep”, Mosley has joined forces with guitarist/singer Will Bentley and drummer Max Hagen as the defiantly bassless Neverland Ranch Davidians. The Spirituals From Life’s Other Side EP threw down the gauntlet with its smouldering psychotic R’n’B. Now they’re back with their full-length debut for Heavy Medication Records.

“Rock’n’roll is still respected and celebrated in Europe, so we were happy to catch the ear of a cool Euro label like Heavy Medication,” says Mosley. “They really understood where we were coming from and helped shape what would become our debut LP. We hope we can fly over and play for European audiences in the near future.

“I’ve always loved the minimalism of Suicide, and that less-is-more approach is hardwired into the Davidians’ DNA,” he adds. “That’s probably why we never bothered recruiting a bass player. We’re huge fans of The Cramps and The Gories, neither of which had bass players, so we didn’t feel we needed one either.” (That being said, Greg ‘Smog’ Boaz of Tex and the Horseheads played bass on one  of the songs on the album.)

Heavy Medication Records is an indie rock’n’roll label started in 2018 by an American expat living in Warsaw, Poland. Look out for new releases by Pat Todd & The Rankoutsiders, Michigan protopunk legends The Dogs, Montreal garage-punkers Jonesy, and desert-fried outlaw country band Tramp For The Lord featuring Doug Cox (another ex-member of The Hangmen).

“Very sleazy feels going on. A good listen and should be heard by everyone.”

“If you took the rock ‘n’ roll train starting in downtown LA , through the Deep South , up to Detroit and down N.Y. City, you would wind up at The Neverland Ranch Davidians.”