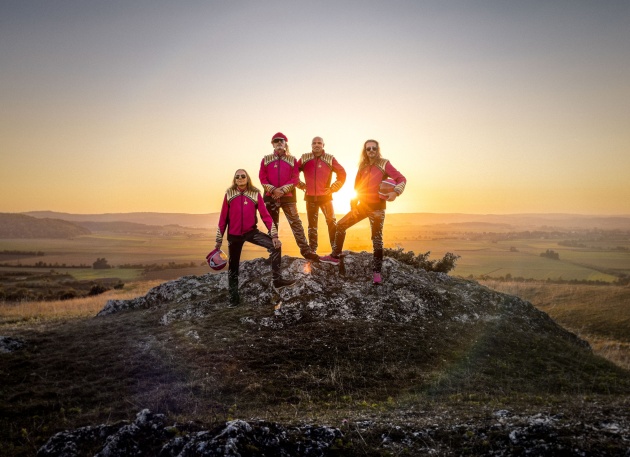 Seriously, was planet earth ever a cosy or even friendly place to be? We have pandemics, ecological disasters, surging prices for beer. Mankind’s only chance is escapism. So let’s enter the orbital glider and head for the stars when Planet Pink, the upcoming album by iconic J.B.O., makes its rounds on March 18, 2022 via AFM Records!

For over 30 years, J.B.O. are the specialists for vociferous escapism at the highest stage. Gold albums and top ten chart positions pave their way. Planet Pink will make no exception, even if the album was created under very special circumstances. Usually the band bosses Vito C. and Hannes „G.Laber“ Holzmann sit together on a couch and exchange ideas. This time they jammed through the phone. It worked out, because Vito and Hannes know each other better than identical twins.

After previously-released first singles, “Metal Was My First Love” as well as the album title track ( in which the Eurodance megahit “Blue (Da Ba Dee)” gets its ultimate J.B.O. touch! ), today the Erlangen-based collective released a lyric video clip for their third single “Nicht Doof” (“Not Stupid“).

Planet Pink was recorded with producer Christoph Beyerlein at Sound and Groove studio, Nuremberg. Beyerlein is part of the J.B.O. family since 1994 and the fifth band member in the studio. Supervised by the observing ears of Beyerlein, the rest of the crew sorted and refined a lot of demo recordings for only one reason: in the end there will be just one planet glow in the brassiest colours. “It’s Planet Pink”!