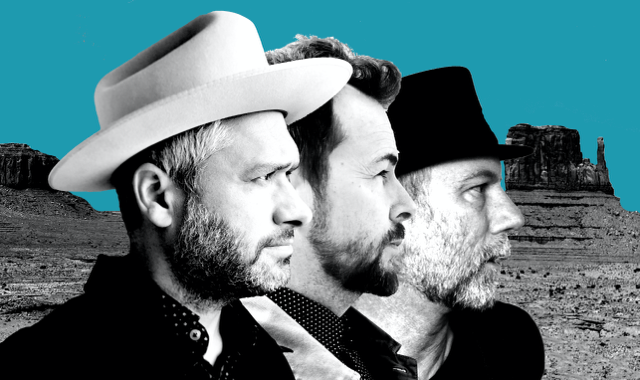 From the mountains of Utah to the trenches of Vimy Ridge, Elliott BROOD‘s songs have travelled the gore and glory of history in equal measure for nearly a decade. The Canadian trio are excited to return to the UK this March with a string of live dates followed by a European tour in April, including an extensive tour of Spain, France & Italy with The Dead South.

With the stomp and thrash of their early albums, Elliott BROOD carved their niche drawing from the darker corners of history and memory. As heavy and harrowing the past can be, for Elliott BROOD, it is also a generous companion, giving the gift of appreciation for times of peace and grace.
With Keeper, Elliott BROOD’s seventh album, the trio deals with the past in more personal terms. The title, which speaks to loyalty and longevity, sets the tone for an album that explores the strength of conviction, and how that strength is tested, again and again, over time. Thoughts of worthiness and dedication, and their emotional flip sides, inform a collection that sees the band exploring those battlefields much closer to home.
Keeper, created during mini writing and recording retreats while hopping across the summer festival circuit, marks another satisfying chapter in the ongoing evolution of Elliott BROOD. From the Polaris Music Prize short listed breakout album Mountain Meadows to the JUNO Award winning Days Into Years, the well-traveled trio of Mark Sasso, Casey Laforet and Stephen Pitkin have created a body of work that is at once meticulous and boisterous, substantial and entertaining.