Italian’s based in Iceland get ready for their debut EP

Hailing from Italy and currently based between there and Reykjavík, Iceland, three-piece My Cruel Goro present their debut eponymous EP, featuring 3 tracks chalked full of early 70s energetic Brit rock with punk leanings, yet through the prism of a thick modern soundbed. It’s no wonder they are getting so much attention from the national press in Italy and that bloggers have referenced such paramount artists as The Clash, The Stranglers, The Jam, Ash, and Weezer.

My Cruel Goro is Andrea Maraschi (vocals, guitar, programming), Andrea Marcellini (bass) andTommaso Adanti (drums). The first two met nine years ago through a mutual friend and have been making music together ever since. My Cruel Goro arose from the ashes of their previous project. “We couldn’t find reliable musicians to form a proper group with a stable lineup. Everytime it ended up being the two of us: Andrea and I,” explains Andrea Marcellini. “We were joined by drummer Tommaso and formed the band in 2014”. 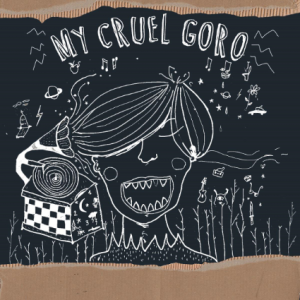 “We wanted the EP to sound as powerful and raw as our live concerts. We simply tried to leverage what we did best: energy, distortion, grit and a sprinkling of electronics if necessary,” says Andrea Maraschi. “You may either like or dislike it, but it’s flesh and bones, and that’s what you want to see on the stage, isn’t it? The inner imperfection and veracity of being human.”

These same concepts have been interwoven into their music videos, all of which are produced by Massimo Scoposki and are being revealed one by one.

Here’s one:
The My Cruel Goro EP will be available on Bandcamp as a free download. The video for ‘Clash‘ will also be released soon.