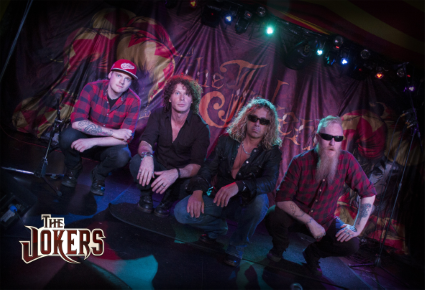 Liverpool classic rockers The Jokers are readying a new record next month. Guitarist Paul stops by to tell us about it

As diverse as international rock’n’roll music presents itself today, as many twists and turns as it may have taken in the past 50 years: whenever this brand of music comes from the UK, it automatically appears to have an unmistakable British flair. This may well be due to the fact the Britain is considered to be the birthplace of rock music and can look back on a centuriesold tradition of that genre. Because really: what would the world be like today without Led Zeppelin, without Free, The Who and the Stones? A question which The Jokers from Liverpool like answer to in their very own way.

Hurricane, the third album by the four-piece surrounding vocalist Wane Parry and guitarist Paul Hurst leaves no doubt where their roots are and where their direction is taking them. “The style we play is ‘big rock’, that sound and feel runs through all our albums,” Hurst explains, adding: “Groove, riff-based songs with a strong top-line vocal melody and hooks. With Hurricane, we have still maintained this sound but tried to capture more of the raw live energy of the band in the recordings.” An energy which oozes through all 12 tracks (plus bonus material) on the album. 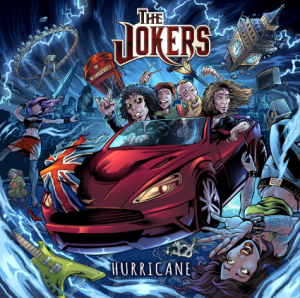 Hurricane will be out on 18 September 2015 on Steamhammer/SPV, a date which will go down as a memorable day with all fans of traditional rock music and a highlight for this genre in general. Even after their 2013 release Rock’n’Roll Is Alive, The Jokers used every opportunity to present their haunting rock songs to the public. Countless club gigs all over the UK, a threeweek tour of Spain, appearances at renowned festivals, such as Planet Rockstock, Hard Rock Hell and Guildfest – The Jokers know that they usually find the most important inspirations for their music in the streets. In addition, the musicians started directly after the release of Rock’n’Roll Is Alive – along with their live activities – to integrate those influences into new material. As often as possible, Parry, Hurst and the two new additions Dan Evans (drums) and Phil Hartley (bass) met at their rehearsal room to work on the material for Hurricane. 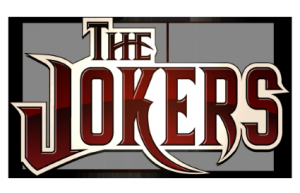 Talking of new additions: Parry and Hurst have obviously struck home when it comes to their two new band members: “Dan has been with the band for the last two years. His style is a cross between John Bonham and Stuart Copeland. Phil on bass has the look of a Viking but plays like Andy Fraser.” The result of the cooperation between those dyed-in-the-wool rock’n’rollers is a sizzling hot, extremely dynamic rock album featuring a dozen new songs.

The recording features heaps of highlights, such as the slightly oriental-sounding opener ‘Run 4 Cover’, which captures the subtlety of an intro that kicks into a hammering headbanging rock grind with a catchy chorus. Hurst: “We contemplated dropping this track as originally it wasn’t working. We had to rewrite it the day before we went into the studio and recorded it very quickly. Somehow in the studio it all came together and when we got the mixes back we were surprised at how good it sounded.” Equally impressive: ‘Angel’, a love song which has a very hypnotic grinding groove. “This is a very raw, emotionally powerful track,” Hurst explains, adding: “‘Angel’ follows the sound of some of our previous songs with a strong influence of Free.” Not forgetting the coolly grooving ‘She’s On Fire’, a number about being out on tour lonely and then coming home to someone and the heat and passion you have together. Hurst: “Musically, the song has got an old-school 60s vibe about it with a very Kinks guitar feel in the chorus.”

Next to those typical Jokers numbers, there’s the swinging ‘Summertime’ – the band’s first completely acoustic track. “It’s out of character for us but the song fits perfectly on the album,” comments Hurst, “everything is organic as we used an acoustic guitar, an upright double bass and Wane used his foot as a beat for the song.” Sounds like The Jokers may well have hit the jackpot with Hurricane.

Especially since no expense was spared when it came to the decisive production parameters: the album was recorded at Liverpool’s Parr Street Studios and produced, engineered and mixed by Tom Size (Aerosmith, David Lee Roth, Journey, Steve Miller Band, Huey Lewis, Mr Big, etc.) at the Tomland Studios, San Francisco. So The Jokers have every right to be proud of Hurricane. The album presents traditional rock music at its most timeless and pure. And it presents a spirited band who transforms its vitality into pure energy. Hurst: “We are a positive fun band and our music reflects that. We’re just an honest hard-working rock band.”

Previous article
Battle Roya
Next article
As Fate Would Have It