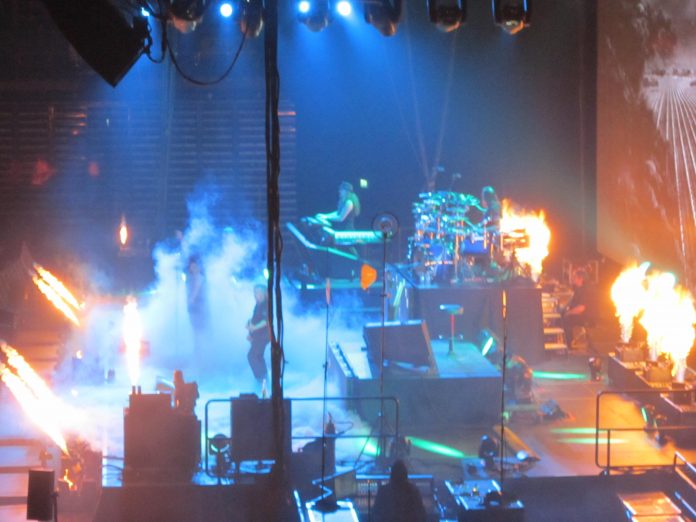 I was very excited to be seeing Nightwish again, so much so I went twice! Having only just got tickets to their sold-out Wembley show back in 2016, I was pleased to be closer to the stage this time. I had a somewhat obscured view with speakers and wires right in my eyeline, so I was beside myself when I realised that my tickets for Arena Birmingham were closer and I had a clear view from the other side of the stage (including some backstage insight into the show’s mechanics!). 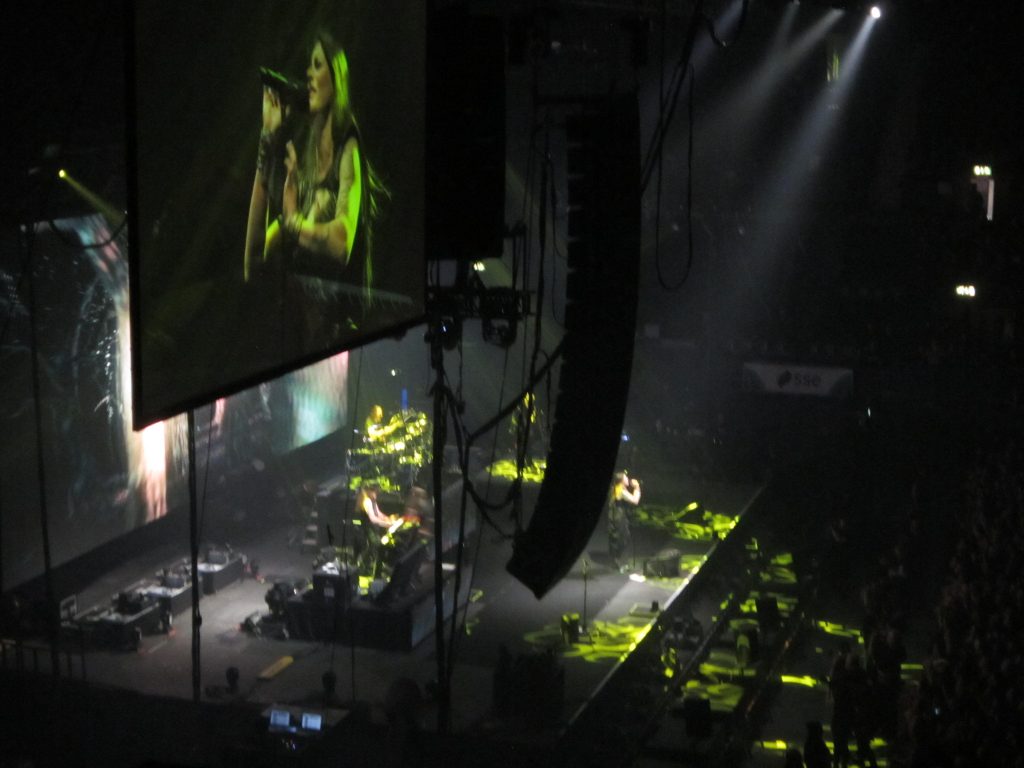 This was the second tour that I’ve seen with Floor Jansen. (The second Nightwish vocalist I’ve seen – Annette Olzon leading us through the show at the much smaller O2 Academy, Birmingham in 2012.) I have liked Jansen’s style ever since I caught her at the Robin 2 with her band Revamp. I can’t remember the date but I know it was part of a showcase for female bands & I was impressed. I am amazed that she has just got better & better – totally suited to Nightwish’s depth and musicality. The vocal harmonies they gave us at these ‘Decades’ shows were stunning!

Anyway, on to the shows…
The curtain drops and we are told to get back to a time when people were ‘in the moment’ and get rid of our phones. The countdown begins and Troy Donockley pipes us back twenty years with ‘Swanheart’ (Oceanborn, 1998).

We’re all settled and the flames begin; the show proper starts. The pounding ‘Dark Chest of Wonders’ followed by the thumping ‘Wish I had an Angel’ (Once, 2004) lets us know the band are here to play!

Fire and smoke fill the stage with atmosphere; the graveyard screens and spot search lights take us through war – ‘10th Man Down’, (Over the Hills & Far Away, 2002) and a little calmness returns with ‘Come Cover Me’, (Wishmaster, 2000). Troy’s low whistles and backing guitars, Emppu Vuorinen’s lead guitar and some choral vocals, backing Floor’s solo, are ended.

The band are enjoying themselves, playing to an international audience. Floor tells us that they are taking us on a special road trip with specials songs…of course, we’re ‘super ready’!
‘Gethsemane’ (Oceanborn, 1998) takes us ‘way back’, millennia if not decades. A woodland trail to the Easter Tomb. Emppu’s technical intro and Troy’s backing low whistle allow the keyboard melody and vocal harmony to flow and almost dance through. 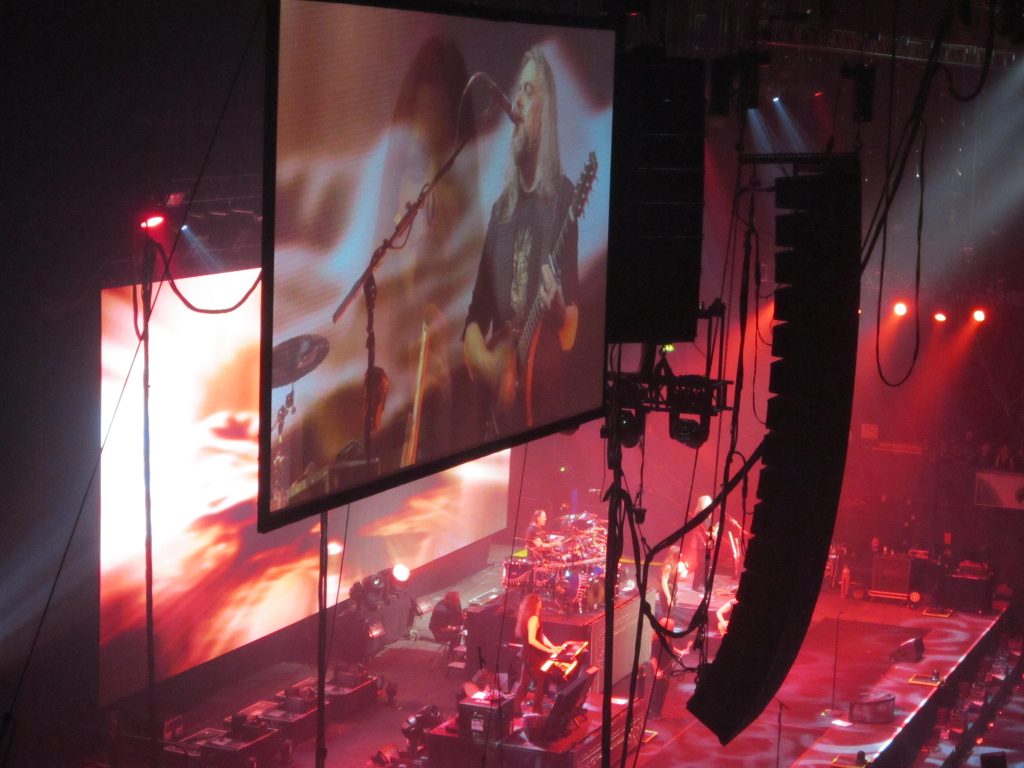 The powerful lyrics and spoken words of ‘Dead Boys Poem’ (Wishmaster, 2000) bring us back down to Earth. Marco Hietala now playing his double neck guitar deepens the acoustics. This is raw emotion.

The mood is lightened with a traditional Finnish tune – ‘Elvenjig’ with its Drumstick beats and jingles, accoustic guitar and low whistle intro building into a whirl of Uilleann pipes and heavy guitar.

Floor’s spoken word intro sees a return to where it all began with ‘Elvenpath’ (Angels Fall First, 1997). The first studio album being the immediate release of a recording meant as a demo! Frozen, snowy scenes and strobe lighting highlight the synthesised keys and striking guitar riffs.

Next, we’re off on a wonderful Nightwish ‘workout routine’ – two whirling tracks from Imaginarium (2011) ‘I Want My Tears Back’ and ‘Last Ride of the Day’.

Troy calms things back down in the ‘land of real ale & crumpets’ leading the vocals and playing bouzouki for another first release track; ‘The Carpenter’. Duets and vocal harmony ensue.

Flames, flashes & fireworks take us rolling though ‘The Kinslayer’ (Wishmaster, 2000), and strobes are added within ‘Devil & the Deep Dark Ocean’ (Oceanborn, 1998). Excellent screaming notes and harmony within Phantom-like riffs. The belting ‘Nemo’ (Once, 2004) and pulsating ‘Slaying the Dreamer’ (Century Child, 2002) end with flames thrown and fireworks that rock the seats for what appears to be a crashing finale into darkness…

The stage is relit with the genius composer and lyricist that is, Keyboardist Tuomas Holopainen, alone with Troy. Together they introduce the rippling first Chapter of ‘The Greatest Show on Earth’ (Endless Forms Most Beautiful , 2015). Floor returns to harmonise. Pipes and spoken word take over. Emppu and Marco return. Strobes and flames lead us through the ocean: Fireworks and burning woodland: starry sky.

If this wasn’t ‘The Greatest Show on Earth’, it was most certainly the greatest show of my year. ‘We were here’ and I suggest that you are at the next one!