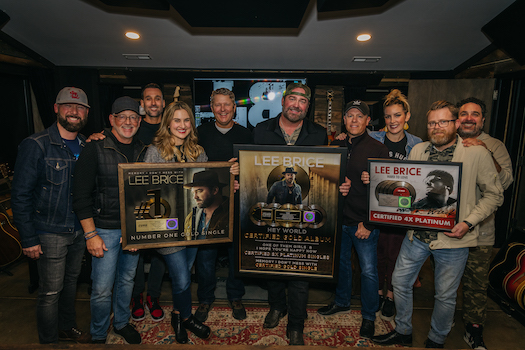 “Man, ASCAP Song Of The Year… whew, what an incredible honor. From the very first night writing it, to the next morning recording it, and singing it every night since then, has been surreal,” shares Brice. “Ashley is such a crazy talent, anytime the moment strikes he’s one you can never go wrong calling! It’s so crazy to see how my music, the new stuff and the old stuff, is resonating so much with my fans. It truly fills my heart… it’s what I strive for every day. To have these new RIAA certifications is such an honor. I’m extremely grateful to make music that people love to listen to. That’s all a music man can hope for.”

Brice was recently nominated for his first American Music Award in the category of Favorite Country Album for Hey World. The nomination follows his fourth consecutive #1 at Country radio with his hit, “Memory I Don’t Mess With.”