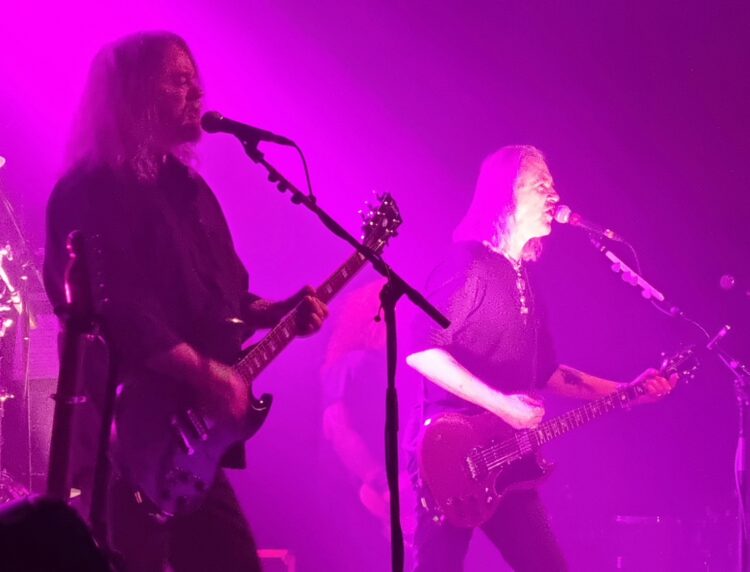 When, towards the opening of the set here, New Model Army play “Lust For Power”, it spits with a righteous fury.

In its chorus, the pay off line hits: “Now the daylight hours pass like the people I have lost/In the triumph of the hour, in the bloody cause – lust for power.”

So, you think back to the last time you saw NMA and January 10th 2020, as it happens, and wonder whether the world is a different place now, really, or whether we really elected these “leaders” in 2019. Indeed, whether any other of the currently available alternatives would serve us any better.

Or, in actual fact, whether to just enjoy this as a rock show, given that – as Sullivan had put it at the start of the evening: “there’s nothing we can tell you about the world that you don’t know about the world, so we’ll just have a wander through our back catalogue.”

Of course, it’s a hefty collection at this point, but it all seems bound together by a collective effort to support the “Good Old Cause” of their namesakes. Proud outsiders, a cottage industry to rival Marillion or The Levellers, this is a band that people are invested in.

From the apocalyptic “End Of Days”, this is a set showed in shadow, with few words beyond the absolutely necessary. “1984” – dedicated here to the P & O workers so shamefully treated by the capitalist system – follows the aforementioned “…..Power” my, how it fits!

“Never Arriving” from 2019’s “From Here” record is followed by a primal rumble of that album’s title track, and Sullivan, a master of the slogan after all, opines “every war sows the seeds of the next” before “Western Dream”.

NMA are one of the more uncompromising outfits around, too, and when they sing “Come on and get me if you can” on “Fate” it seems like a futile request. The Army of fans, if you will, are of the sort that seem to have no common thread, instead, they are merely bound through this music, these songs. Some mosh, some dance on the periphery, some are enthralled. All are totally with the band. It’s a rare sight indeed.

Ceri Monger switches from bass to extra drums on “Born Feral” and that one is particularly primal, and the acoustic rawness of “Before I Get Old” is almost inescapable. “Where I Am” (“a lockdown song” suggests the frontman) proves the point that the greatest songs can transfer to situations, and “Bittersweet” (“our first single was a break-up song” offers JS with the hint of a smile) goes way back – almost 40 years. This is all before “Angry Planet” heads down a rather nihilistic (but probably accurate) road.

It always strikes me as slightly incongruous that a band – and I mean this in the best possible way – as anti corporate and anti-rock star as NMA do encores, but “Courage” is passionately dedicated to the people of the Ukraine, “No Rest” is worked up and there’s a beautiful bleak harshness about “Get Me Out” before, a simple, “be well. We’ll see you again” and a massive thump of the microphone sees the band exit the stage.

It symbolises an end. It offers a punctuation mark akin to a full stop. Just as this show had represented a proud return from one of rock’s greatest anti-heroes. In the same way in the 1640’s the New Model Army had been precluded from a seat in parliament, then Justin Sullivan and his band of brothers wouldn’t want to be at the top table either. More power to them for just that.