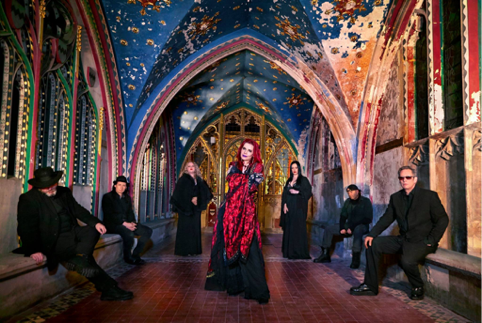 The Eden House are a musical collective who’ve collaborated with a wide variety of vocalists and musicians and have previously released two albums and two mini-albums.  Their third album ‘Songs For The Broken Ones’ is due on June 23rd.
It features Monica Richards of Faith & the Muse on vocals, with lyrics sung mostly in Spanish.  Monica, an eco-activist veteran of the DC punk scene and sometime Conflict member, was asked about the single and video:
“I’ve spent my life studying worldwide literature; I just moved and unpacking boxes found this anonymous poem from Spain.  I wish I had more history to it.  I chose it for the song because it fitted the style of music.  I wanted to honour it and didn’t want to sing an English translation … I’ve always tried to sing in original texts; through the years I’ve sung in Latin, French but I always wanted to sing a song in Spanish.  I don’t speak Spanish well, but I can get by.  As I live in Los Angeles I’m not around people from Spain, so I worked more from the Mexican accent.
Filming the video was gorgeous and surreal.  The church basement felt so ancient, it really set the mood.  I’m not exactly comfortable in churches, so I wanted to be sure that my own pagan Goth Queen sensibilities were very much intact”
Alongside Monica, other lead vocalists featured on ‘Songs For The Broken Ones’ are Lee Douglas of Anathema, Louise Crane, Meg Pettitt and Kelli Ali of Sneaker Pimps.  Musicians include Bob Loveday of Penguin Café Orchestra & Van Morrison and Simon Hinkler of The Mission.
The Eden House are built around the core duo of guitarist Stephen Carey and bassist Tony Pettitt of Fields of the Nephilim together with drummer Simon Rippin of The Nephilim.  They embellish their music with lush layers of violin and diverse female vocals, causing them to be categorised on Wikipedia as ethereal wave.  Without betraying their goth-rock roots, they expand their horizons working with top musicians from the prog-rock and trip-hop worlds to create their unique fusion sound.
Formed in 2009 they’ve previously attracted calibre collaborators such as Julianne Regan of All About Eve, Amandine Ferrari, Evi Vine, Jordan Reyne, Pink Floyd’s sound engineer Andy Jackson and Phil Manzanera of Roxy Music.  They’ve toured and headlined festivals in the UK, Germany, Belgium and Poland.
‘Verdades (I Have Chosen You)’ / ‘Ours Again’ 7″ & digital single.  JUNG081.  May 19th.
‘Songs For The Broken Ones’ album.  FREUDCD123 / LP123 (2xLP).  June 23rd
Songs For The Broken Ones track listing