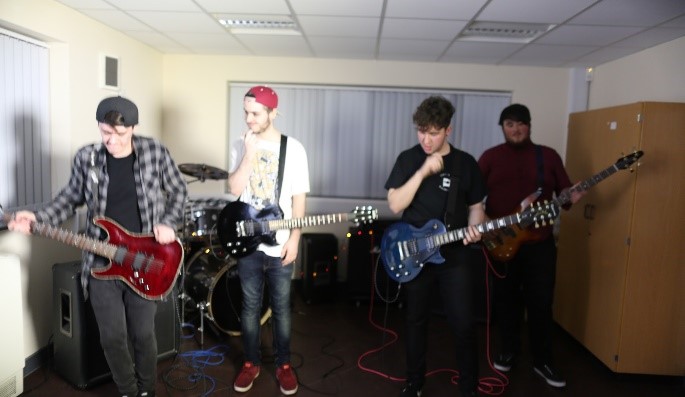 With their new one out this week, Better Than Never take you behind the scenes

Having crafted a set of songs primed for the full studio treatment, the sextet Better Than Never booked time at the hallowed ground of The Ranch Production House in Southampton. “We had 4 specific songs in mind that we wanted to record, but as time grew closer, it dawned on us that actually, we didn’t want to record those songs at all.” Over time they settled on the material they really liked and the outcome is far cobbled together. ‘Homemade Hero’ is built upon an easycore inspired foundation of meaty guitars and grooves, Better Than Never pepper their sound with a layered dual vocal approach reminiscent of Four Year Strong and vintage Taking Back Sunday, James and Will’s distinct vocals complimenting each other across cleverly crafted hook lines. With lyrical themes ranging from teen romance gone awry to, erm, Prison Break, Homemade Hero has character in spades. Here the band take you behind the scenes of the video for their first single from the release…

‘Back of the Line, Kid’ is the oldest song in the band’s repertoire having been written by James years before the full line up of the band was even completed. It stood the test of time and after making it onto our debut studio EP ‘Homemade Hero’ we decided it was not only our favourite song on the EP, but the song which summarised it as a whole.

The song and video is about feeling you’re being beat down and left behind when in reality it always gets better, the video tackles this in a little more comedic way though.

Max came up with the idea and woke Will up with a 2pm phone call, after a long night shift the day before, for him to agree it was a good concept despite being relatively annoyed at his lack of sleep.

The video shows some of the boys auditioning as superheroes with an unlikely contender instead taking the final prize.

Because we only had a small-ish budget to film the video we had to shoot the entire thing in one day which in hindsight probably wasn’t the greatest idea we’ve had. The video had us shooting at scenes such as a running track, a boxing ring and a pizza shop which of course going by our luck, were in opposite ends of the county.

Our guitarist and sometimes singer Will was directing the video, but because another night shift (notice a theme here), had to miss the running track scene shot on a very cold morning in Abingdon. To say shooting without him went smoothly would be a complete lie. Luckily we had James’ brother Matty along to assist us and due to his own talents we think it’s unnoticeable that we had pretty much no idea what we were doing with the camera equipment and big lighting rigs!

After Will joined us things went a little more smoothly and luckily we found our friend Hayden who did a fantastic job of ‘the kid’ in the video and gave a stellar, comical performance punching James in the face for the final scene. To say that we got a few more takes of that scene than we needed to could be an understatement, maybe not James’ favourite part of the day.

We shot the performance side of the video in local community centre which at the same time had booked a Christmas fayre, we were carrying amps and equipment through a queue of children waiting to meet Santa, hopefully we didn’t ruin the magic too much!

We ended a very long day perfectly by shooting our final scene at ‘The Olive Branch’ in Witney which on camera shows the superheroes tucking into one of their insane pizzas, although of course behind camera there were a fair few more of us eating! They definitely receive a 10/10 on Pizza tastiness from Better Than Never (disclaimer: other pizza places in Oxfordshire definitely exist but definitely aren’t as good).

Previous article
Metal From Out Of This World
Next article
REVIEW: SLUMLORD RADIO – Too Pretty For Tijuana (2015)