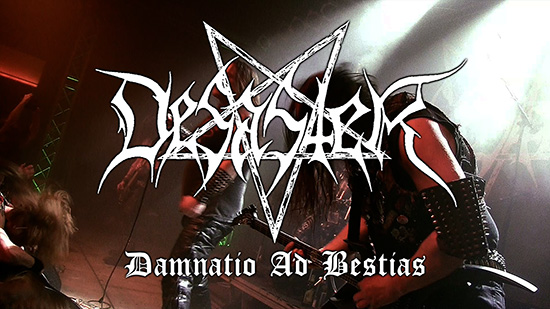 German Black Thrashers DESASTER have scheduled their new album “The Oath Of An Iron Ritual” for release April, 8th through Metal Blade Records.

Check out the live video for the first single ‘Damnatio Ad Bestias‘ via the website of Rock Hard Germany at rockhard.de.

The video has been filmed by Visions In Fear (visions-in-fear.de) and directed by Oliver “Bomber” Barth at the DESASTER show in Bamberg, Germany a few weeks ago.

You can still stream the 2nd single ‘End Of Tyranny‘ via the website of Deaf Forever at deaf-forever.de.

The first single “Damnatio Ad Bestias” is still available at metalblade.com/desaster where you can also check out the front art and the pre-order section. “The Oath Of An Iron Ritual” will be released as a limited Digi-CD and on all digital outlets.

With their eighth studio album “The Oath Of An Iron Ritual“, DESASTER stay true to the uncompromising manners they have always represented. This time around they recorded together with Patrick W. Engel in their own rehearsal space, which took just a couple of days in October but did not hurt the sound one bit – on the contrary, but listen yourselves!

Look forward to DESASTER‘s “The Oath Of An Iron Ritual“! A barrage of metal without compromises that will easily split skulls everywhere. Prepare for cutting riffs, pummeling drums, a growling bass and hellish screams!