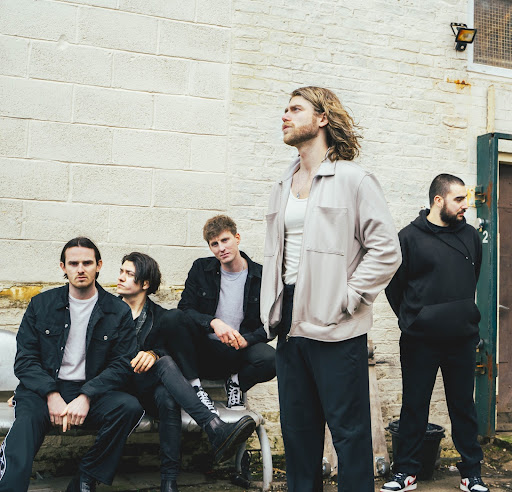 GATHERING OF STRANGERS are making their mark with thunderous new single “Naked & Blind”.

Born from the idea that strength can emerge from the wreckage of vulnerability and tough times, the latest cut from Gathering of Strangers gnaws its way through shadowy indie-rock riffs, an anthemic chorus and a narrative of overwhelming emotions.

Crepuscular and catchy in equal measure, the Manchester-based five-piece blend affecting lyricism —  touching on the transformation to hope from helplessness — with earworm guitar rhythms that similarly seesaw between light and dark.

Speaking of the conception of the thunderous new track, Gathering of Strangers say:

“We wrote this song last year in the middle of the madness of the pandemic. Tom, our guitarist, led the rehearsal with a subtle yet captivating lead line that we ended up forming the whole song around.”

Discussing the narrative behind the track, the band add:

“Battling with our own highs and lows throughout these years taken from us, we used this song to portray our heightened emotions in our most vulnerable states. Tackling these tough times, we were able to identify how strength can be born from vulnerability when allowing yourself to be open and focus on brighter days ahead.”

After its conception in the peak of the pandemic, the track was mixed and produced by David Watts at The Chairworks (Castleford), and engineered by Seadna McPhail.

With its rousing, rip-roaring hooks and inspirited and impassioned narrative, “Naked & Blind” sees Gathering of Strangers make their mark as an voltaic guitar band with blistering potential — and the promise of more to come.

One-time strangers who would go on to forge the closest of bonds, Conor, Tom, Bruce, Peter and Andre came together in the creative crucible of Manchester while studying at University. Hailing from all corners of the country and with a diverse array of musical tastes, as Gathering of Strangers the quintet came together with one shared musical vision.

Defiantly ploughing their own furrough since their formation in 2015, the band have become long-established favourites in their newfound home. Selling-out headline shows at the likes of YES, Soup Kitchen and Night & Day, entrancing sets at Dot2Dot and Neighbourhood have also seen them win over the masses with triumphant festival appearances. They have also played support shows with  Third Eye Blind, Morcheeba, Electric Six to name a few.

Flirting their promise with a more mainstream audience, GoS have released a series of untouchable singles to date, with cuts like their head-turning debut “Nice Hair“, the intoxicating “Lady“, and impassioned recent single “Cherry Red”, gravitating ever greater audiences to their cause and receiving air-play on BBC Radio 6 Music, Kerrang Radio and XS Manchester in the process.

Another sign of the bright future the band have ahead of them, Gathering of Strangers make good with the  anthemic second taste of a brand new EP being planned for the coming months. “Naked & Blind” is out on 1st April 2022.

Previous article
NEW FALSEHOOD
Next article
ELU, ELU, ITS GOOD TO BE BACK