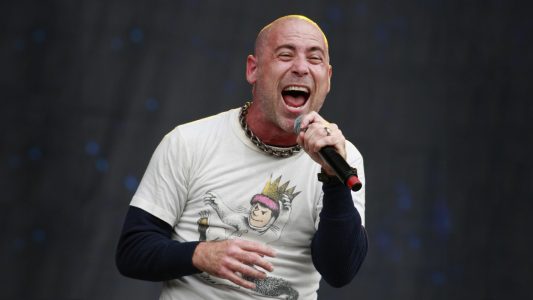 We catch up with the Armored Saint vocalist to talk UK shows, live albums and urmm, Earth, Wind And Fire

“Sorry, I’ll be with you in just a sec,” smiles John Bush. “I am just sending an email to the guy who I was meant to talk to you before you. He keeps saying he’s calling but he’s calling Joey [Vera – Armored Saint bass player]”.

Bush is in his kitchen in LA, and MV is delighted to say we are Skyping the right person, as there is much to discuss in the world of Armored Saint right now.

For one thing, there is their first live album getting on for 20 years – “Carpe Noctum” is out next Friday – and then there is an imminent UK tour. The band’s first proper run on these shores, if you please.

So, as Bush decamps to his living room and drinks his health shake, it seems opportune to ask the simple question to start with: “why now?”

Bush is pleasant and polite to a fault, but he’s also refreshingly honest. “You know, the live album is good way to transition between records,” he says. “And when we got the opportunity to record these two shows in Germany, we thought ‘yeah why not’ and it sounded great.

The singer is acutely aware that the live album isn’t as popular as it once was, but is at a loss to explain why that might be: “Maybe it’s not as hip as it was, people don’t really make them, but you only have to look at the history of them….so many great records.”

John then proceeds to reel of a list that includes Judas Priest, Iron Maiden, Thin Lizzy Deep Purple and many others – in short, he’s namechecked some of the finest bands ever. Not too shabby company to be in, really, and he agrees. “You know, if you look at some of those bands, like Thin Lizzy. Phil is much missed and it’s the variety of those songs that really strikes you. No one ever did that in quite the way they did.”

Nevertheless, “Carpe Noctum” wasn’t originally scheduled to be released at all. It began as a Pledge Campaign, which Bush freely admits was to fund their US tour with Queensryche late last year. “Yeah, we gave it as a Pledge,” he recalls, “but it sounded so good that we decided to give it a proper release. That’s why it’s only got eight songs on, some people have complained about that, but we are really happy with how it turned out.

Next month fans in the UK will be able to see this for themselves, as the band play a few shows around their scheduled Hammerfest appearance. And Bush is clearly excited at the prospect. “We looked to do something in Europe to make it worth our while, you know? And we are really pleased that we can play some places we haven’t played before like Manchester and Birmingham.”

The Birmingham mention is interesting and it is something of an anomaly that the band have never played the second city – before. A fact that the singer is quick to acknowledge himself: “Look, I don’t want to blow smoke up anyone’s asshole here,” he says. “But when we started the band we just wanted to sound like the UK bands like Maiden and Sabbath.”

Sabbath, of course, have just played their last show about five miles from MV is sitting, and mention to John that we saw the last dates. Gratifyingly, Bush – despite having been in the rock n roll business for 30 years himself – has retained that ability to be a fan and is keen to talk about The End tour himself saying: “I saw them at The Hollywood Bowl with my family, we took our son who is nine and they sounded incredible. Tony Iommi, well, if you want to talk about the greatest guitarists ever, he’s the man, isn’t he?

That family environment is of paramount importance to Bush. “Yeah,” he confides. “I love playing music live, but I don’t like being out for a long time these days. You miss too much of your kids growing up, and I don’t like being away from my family too long.”

And yet, as he equally freely says, a band needs to be on the road. “Well, as much as we all enjoy it, it really is the only way to be in a band these days. You have to sell tickets and merchandise to keep it all going.”

With their last studio record, “Win Hands Down” Armored Saint really gave vent to their hard rock side, but according to Bush, they have always been content to do their own thing. “Well, yeah, when we started in the early 1980s as much as we loved the UK bands, we didn’t really sound like anyone in particular,” he suggests. “Then, of course we are proud to be from LA – it’s my city and my home – but the whole hair metal thing happened, and we might have had some ballads but we didn’t sound like Aerosmith, Motley or whatever, so we’ve never really fitted in.”

Bush puts that down to the music he grew up with and, whilst you might expect him to say some of the names he does – Maiden, Zeppelin and others – there is one that he mentions a couple of times in our chat that might take you by surprise. Earth, Wind And Fire.

It turns out the Chicago soul troupe once led by Maurice White were quite the influence on the young Bush (he’d already mentioned his love for their live record) and when MV suggests that we’d not expected to talk about soul with him. He grins and says, “no probably not, but we’ve always had that element to us. I’ve always thought I am a soul dude in a metal singers body!”

Whether any Earth, Wind and Fire covers make the set for the tour is probably unlikely, but then, as the man himself says: “the great thing about playing these places that we haven’t done before is we can do anything we like! I haven’t written a setlist up yet, but it will be cool, that’s for sure.”

Not touring over here regularly presents its own problems, but Bush smiles at the prospect. “We’ve played London before, obviously, but the only place we’ve done before is Belfast but that was a long time ago.” It will be done a slightly smaller scale perhaps, but again the affable singer is not bothered. “Well, we’ll have a van, but that’s cool because the journeys aren’t too big, we’ll have two crew guys at the max, but it doesn’t matter, we just want to get over there and play.”

If there’s a real feeling of going back to basics about it all, then that really doesn’t extend to the abilities of the band themselves. “You know what,” smiles Bush. “I feel I am singing better than ever, I mean…” at this point he points to his bald head, “I might have less hair than ever and we are getting older, but we sound good. Gonzo [Sandoval – drums] and the rest of the guys, we are really feeling about the band and we can’t wait to play these shows and show everyone.”